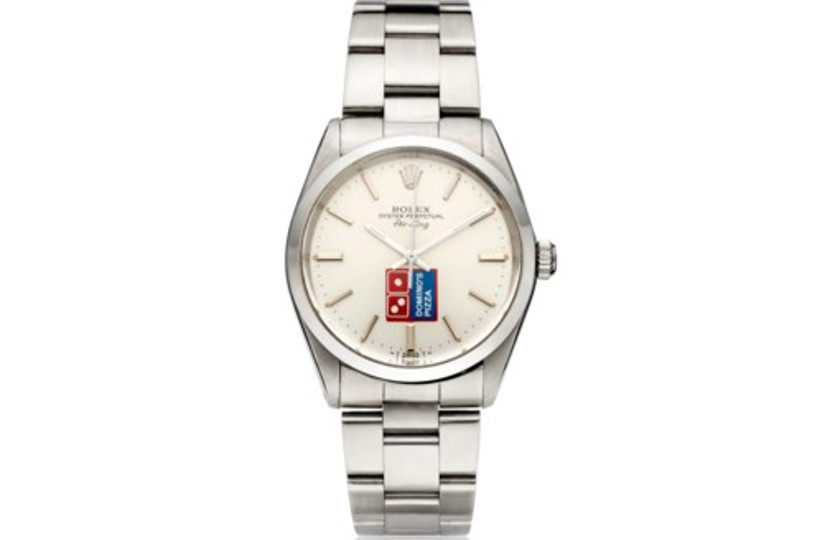 Christie’s will offer a rare Domino’s Pizza branded Rolex watch in an online sale that closes on May 8.
The 1989 Air-King, one of the more affordable models in the Swiss maker’s stable, is branded with the Michigan based chain’s corporate logo. It’s valued at up to $5,000.

Domino’s has handed these watches out as rewards to managers for some time.

The only way to get one is to achieve store sales of $25,000 for four weeks in a row (it used to be $20,000). The practise began in 1977 when company founder Tom Monaghan promised a franchisee he’d give him his Rolex if the store hit that target. The franchisee did it and the challenge stuck.

For a while after Domino’s&nbsp;used Seikos (a more affordable Japanese brand) as the prize, but soon decided to up the reward.

The challenge still stands today, although Domino’s has since moved its logo from the dial to a less obtrusive spot on the strap.

Rolex has a history of partnering with luxury brands, but Domino’s is a rare interloper from the corporate world.

Paul Altieri, of Bob’s Watches, told Yahoo Finance: “…I’ve never understood why they [Rolex] allowed Domino’s Pizza and others outside the luxury world to logo their watches.

“It does add value as there are lots of collectors — and past employees of the Company — who want them. In general, it adds about 10-20% over a normal non branded model.”

While the company itself is unsure how many of these watches are out there, Altieri notes that specimens from the 1990s are more common as this is when the company really started to expand.