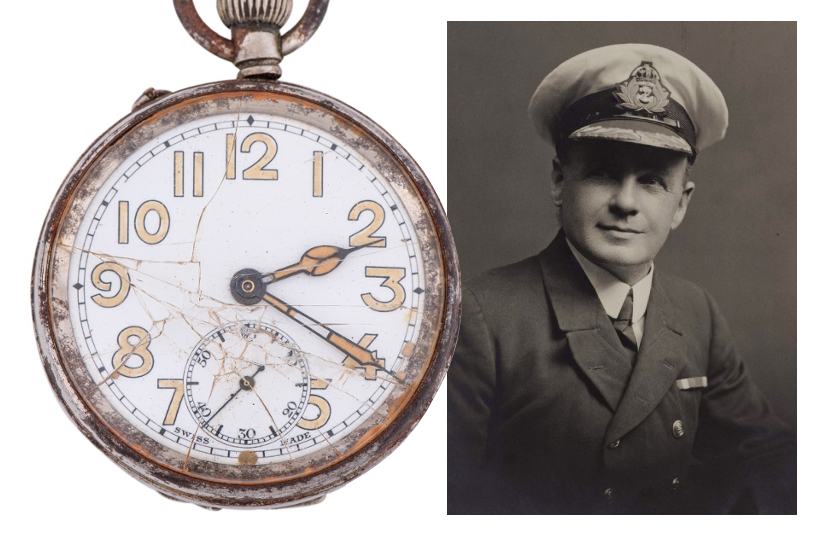 The watch owned by Charles Lightoller, the Second Officer who miraculously survived the sinking of the Titanic, is up for sale at Goldin Auctions.

The Swiss silver pocket watch bears the name “Charles H Lightoller” and his rank “2nd Officer” engraved on the reverse of its rusted case.

The watch hands behind the cracked face are frozen in time at 2:20 – believed to be the exact moment Lightoller plunged into the icy waters of the Atlantic as the Titanic sank beneath him.

On the evening of April 14, 1912, Second Officer Charles Lightoller completed his final bridge watch, ordered the ship’s lookouts to watch for ice until daylight and retired to his cabin.

As he was preparing for bed he heard the ship’s collision with the iceberg, and he returned to the deck still wearing his pyjamas beneath his Officer’s uniform.

As Second in command, Lightoller then took charge of the evacuation proceedings and ensured that the “women and children first” lifeboat policy was strictly enforced.

Having done his duty, and witnessed the horrible sight of desperate passengers swept overboard as the ship broke apart, Lightoller then dived into the Atlantic to meet his fate.

He later described hitting the freezing water as like “like a thousand knives being driven into one’s body”, and he was quickly sucked beneath the waves and pinned underwater against a grate.

However, as the ship’s boiler exploded a huge rush of warm air surged up through the grate and blew him back up to the surface, where he was able to swim to an upturned lifeboat.

He found refuge along with 30 other survivors on Collapsible lifeboat B, and together they spent the night battling to stay afloat amidst the icy waves.

They were eventually rescued by another lifeboat, and when the RMS Carpathia arrived the following morning Lightoller was the last survivor of the disaster pulled from the water.

The pocket watch originates from the collection of Ken Schultz, the world-renowned expert in ocean liner memorabilia and maritime antiques who wrote several books and served as an advisor on the blockbuster 1997 film Titanic.

Although the watch features a minimum bid of just $5,000, it’s expected to far exceed that price before the auction ends on December 7.

In 2008 a similar pocket watch owned by ship’s steward Edmund Stone sold at Henry Aldridge and Son for a record $154,000.

Just like Lightoller’s watch, that timepiece had also frozen at the moment Stone entered the water, 2:15AM, although sadly Stone did not survive the tragedy.

And in August 2018 a watch owned by Second-Class passenger Sinai Kantor sold at Heritage Auctions for $57,500.

Kantor’s wife Miriam survived the sinking in one of the lifeboats and was later sent the watch, which had been recovered from her husband’s body when he was pulled from the water.

Due to Charles Lightoller’s significance in the Titanic story, items from his personal collection have previously sold well at auction.

In April 2018, Lightoller’s menu from the first meal ever served aboard the Titanic sold at Henry Aldridge and Son for £100,000.

The meal was served to the crew during the ship’s first day of sea trials, before passengers came onboard, and Lightoller had given the menu to his wife before they set sail from Southampton. 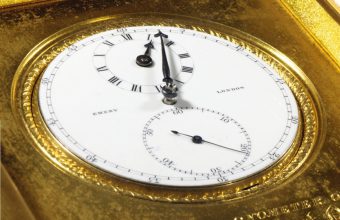