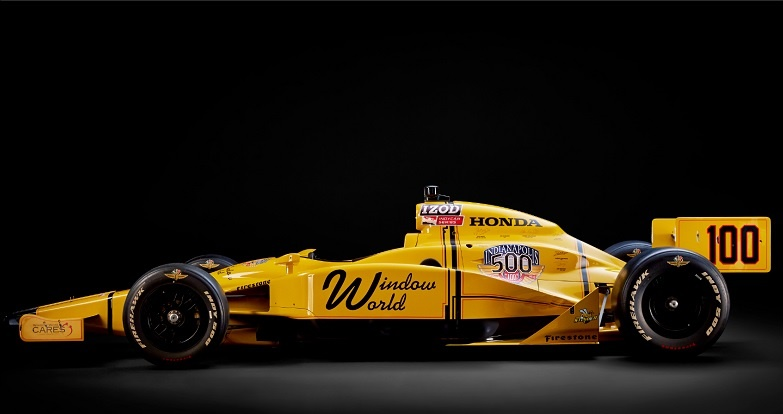 A custom-built car signed by every living Indy 500 veteran will be auctioned for charity at Barrett-Jackson later this month.
The Stinger is a modern interpretation of the 1911 Marmon Wasp, the first-ever Indy 500 winning car driven to victory in 1911 by pioneering racer and constructor Ray Harroun.

Originally commissioned by Window World, the car combines state-of-the-art aerodynamics with a meticulous recreation of the Marmon Wasp’s yellow and black color scheme, and features an Indy race-winning engine donated by Honda.

American racing great John Andretti has driven the car around the U.S, gathering the signatures of ever living Indy 500 driver. These include four-time winners A.J. Foyt, Rick Mears and Al Unser Sr., legends such as Jackie Stewart, Emerson Fittipaldi and Cale Yarborough, and modern racing heroes like Danica Patrick and Tony Stewart.

Now bearing a remarkable 249 signatures, the car will be sold by Barrett-Jackson in the run up to the 100th running of the Indianapolis 500 on May 29, and is expected to achieve in excess of $1 million.

All proceeds from the sale will benefit St. Jude Children’s Research Hospital in Memphis, Tennessee, one of the nation’s leading research hospitals which pioneers treatments for children with cancer and other life-threatening diseases.

"We are honored Window World reached out to us to be a part of this very important event," said Barrett-Jackson Chairman and CEO Craig Jackson. "The Stinger is a unique piece of racing memorabilia, and we are determined to excite the crowd to raise as much money possible for such a great cause."

"We are extremely excited to partner with Barrett-Jackson, the nation’s leader in collector car auctions," added Tammy Whitworth, CEO of Window World. "We need a powerhouse auctioneer so we can raise the most money possible for the children fighting for their lives at St. Jude."