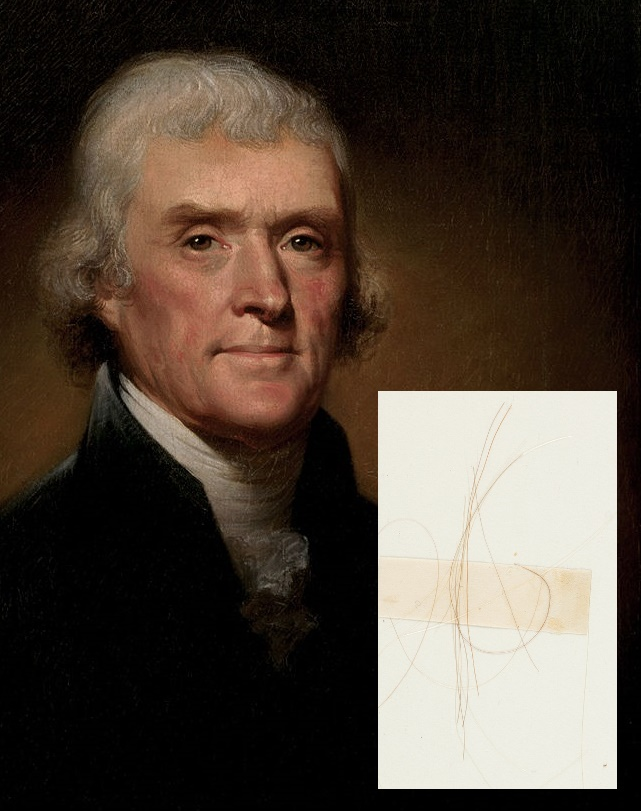 From the hairs of a president’s head, to the wings of the world’s first plane, Heritage Auctions will offer some small but important pieces of American history for sale in Dallas this weekend.
The company’s Americana & Political Grand Format Auction will include more than 400 lots, spanning four centuries of American history.

Amongst the most unusual lots on offer is an envelope containing 14 strands of hair from the head of Thomas Jefferson.

Obtained by Dr. Robley Dunglison, personal physician to Jefferson at the time of his death in July 1826, the strawberry blond strands are believed to represent the world’s only sample of hair from the third U.S President, and as such are expected to sell for more than $5,000.

For fans of early aviation, the sale features perhaps the ultimate item of memorabilia – an original piece of fabric from the wing of the Wright Flyer III, the first plane to make a powered flight at Kitty Hawk in December 1903, which is expected to sell for more than $10,000.

According to Harold S. Miller, co-executor of the Orville Wright estate and husband of Ivonette Wright Miller, niece of the Wright Brothers: "When Orville Wright prepared the Kitty Hawk machine for public exhibition, the original fabric had to be replaced, as it had been underwater during the Dayton Flood of 1913. He substituted new fabric of identical material. After his death in 1948, we found that he had preserved some of the original coverings of the wings."

Other items plucked from the fabric of American history include a rare early 19th century Cotton Gin, the invention which revolutionized the South, estimated at $5,000+; an original button from the inauguration of George Washington in 1789, estimated at $3,000+; and an official invitation from&nbsp; Abraham Lincoln to attend the First White House Dinner Dance in February 1862, estimated at $2,500+.

The Heritage Americana & Political Grand Format Auction takes place in Dallas and online on Saturday May 14.