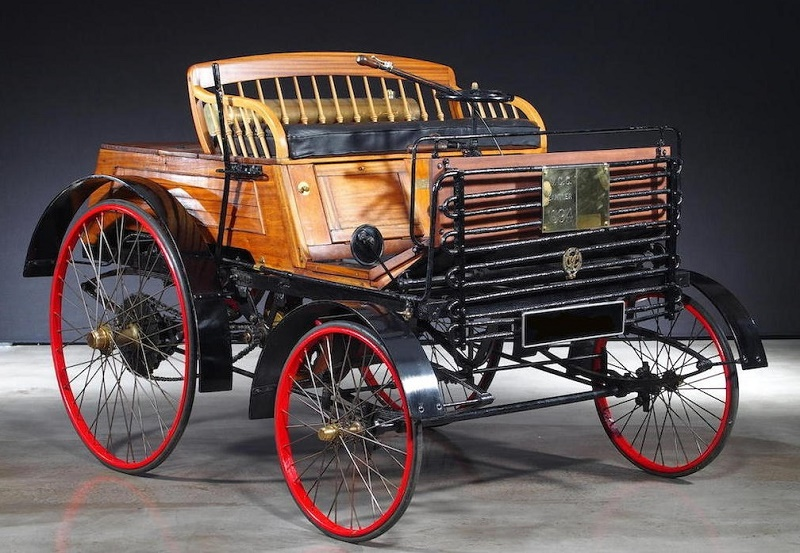 Bonhams is set to offer the oldest working British car in existence at auction this week, a remarkable 123 years after it was first built.
Despite being built during the reign of Queen Victoria, the vehicle – known as the Santler 3½ Dogcart – is still roadworthy, and is expected to sell for £200,000 – £250,000.

The car features a varnished wooden body on an iron seating platform, with wire-spoked wheels and solid rubber tyres.

It was built back in 1894 by brothers Charles and Walter Santler, who originally ran a company manufacturing bicycles, steam engines and water wheels.

They soon began to experiment with four-wheeled vehicles, and in 1887 they attached a vertical boiler to a small-wheeled frame to create a steam-powered vehicle.

However, the project quickly ran into problems thanks to the Locomotive Act 1865, otherwise known as the Red Flag Act.

The law stipulated that any self-propelled vehicles must be capable of carrying a crew of three people, one of whom had to walk 60 yards ahead of the vehicle with a red flag to warn other road users as it approached.

As the Santler Brothers’ vehicle could only support two people, they were forced to abandon it for a few years.

In the early 1890s they tried again, this time with a lighter gas-powered engine on the frame, but its lack of power and range made it equally impractical.

It wasn’t until 1894 that they attached a small petrol engine to the steam car chassis, and the Santler 3½ Dogcart was finally up and running.

By the early 20th century the experimental car was back in storage, and there is stayed, even surviving a WWII air raid, until it was rediscovered by a collector of historic vehicles.

In the 1950s a new ½hp single-cylinder water-cooled Benz engine was added, with the approval of the Veteran Car Club, and since then the Dogcart has passed through the hands of several veteran car enthusiasts.

Now beautifully restored and complete with a continuous history file, the car is ready to roll in the annual London-Brighton Run, the world’s longest-running motoring event which caters for vehicles over 100 years old.

The Bonhams sale takes place in London on November 3.