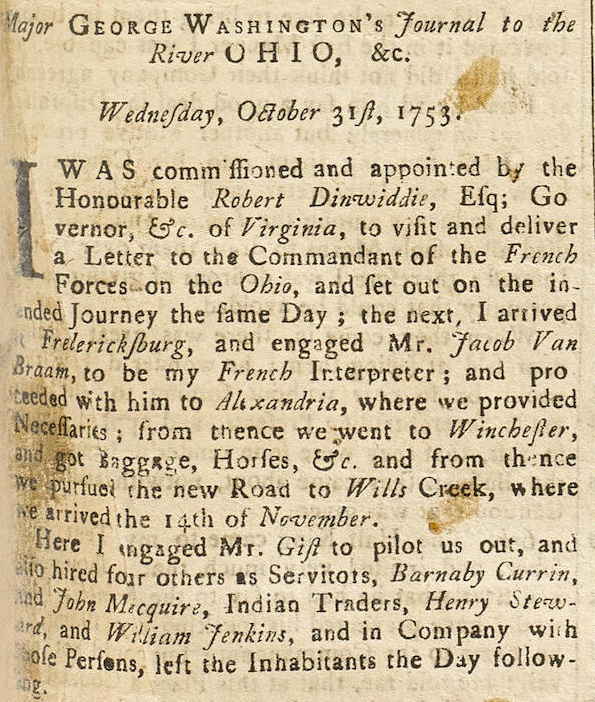 Items from his collection have previously been offered at Swann Galleries and Bonhams, and now Bonhams will present a second offering, focusing on U.S Presidential history.
"The most special aspect of collecting historical documents and newspapers is that sense of immediacy, messiness, mistakes and excitement they offer—understanding what it was like to live in those times," says Caren.

"Some problems were the same and some shockingly different. History is written by the victors in books, but real history is shaped by everyone in letters, protest posters, newspapers and personal records. And, that’s what we have here – ‘old news’ – it’s very democratic."

Leading the second offering from the collection is a highly rare second-printing copy of George Washington’s Journal, the document first published in The Maryland Gazette which led to the French & Indian War. Believed to be the only American copy of the work remaining in private hands, the journal is expected to sell for $60,000-$90,000.

The archive also features a copy of George Washington’s Thanksgiving Proclamation which marked the beginning of Thanksgiving in 1789. Originally owned Isaiah Thomas, one of the most famous printers of the Revolutionary Era, the copy comes with an estimate of $30,000-50,000.

Further notable highlights will include a letter from Declaration of Independence signatory Elbridge Gerry to John Adams, congratulating him on winning the first Presidential race, estimated at $10,000-$15,000; the Authorization for the 1845 Treaty of Wangxia, the first treaty between China and the United States, signed by President James Polk and valued at $20,000-$30,000; and the Thomas Jefferson and James Madison signed documents convening Congress to vote on the Louisiana Purchase, estimated at $25,000-$35,000.

The Caren Archive II: How History Unfolds on Paper takes place at Bonhams in New York on April 11.