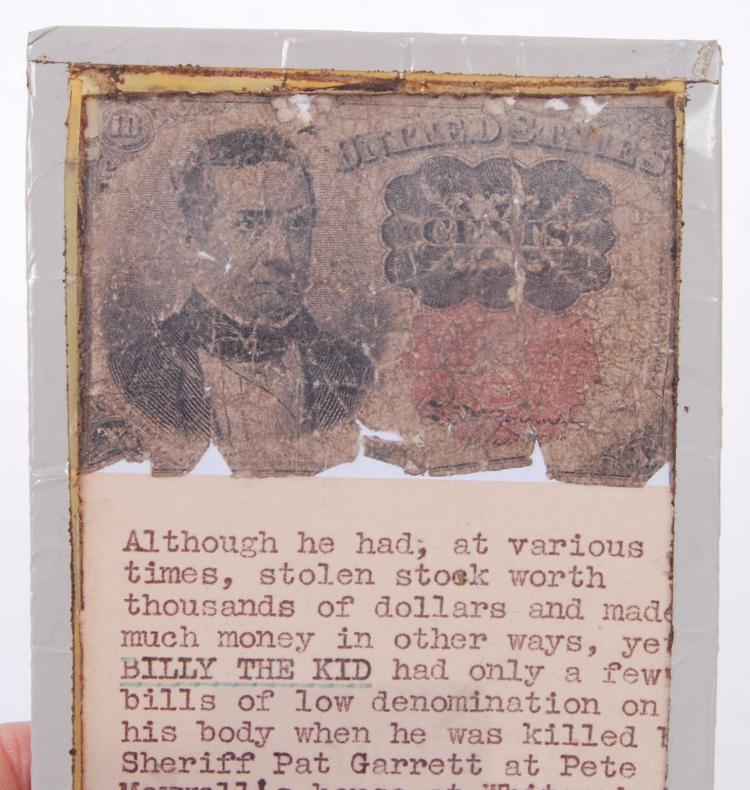 A banknote allegedly found in the pocket of outlaw Billy the Kid is up for auction in the U.K.

The crumpled, torn and faded 10-cent note was discovered amongst the estate of a collector in Bristol, along with a mysterious typed note which reads:

"Although he had, at various times, stolen stock worth thousands of dollars and made much money in other ways, yet BILLY THE KID had only a few bills of low denomination on his body when he was killed by Sheriff Pat Garrett at Pete Maxwell’s house at Whiteoaks New Mexico. Here is one of the bills, taken from the body by IGHENIO SALAZAR (sic), before its removal for burial at Fort Sumner."

The Regulators were formed to avenge the murder of English rancher John Tunstall, by a rival posse deputized by Lincoln County Sheriff William J. Brady.

Salazar took part in just one skirmish during the wa, the five day battle at the McSween house, during which he was shot and forced to play dead in order to escape.

Billy (real name William H. Bonney) was one of six men who later ambushed Brady in Lincoln, killing the Sherriff and his deputy. Whilst awaiting execution for Brady’s murder in 1881, Bonney escaped jail after killing two guards and fled to Salazar’s home, where his close friend helped remove his shackles and fed him.&nbsp;

There is no official record that the two men ever met again, and Bonney was shot and killed by Sheriff Pat Garrett just three months later, in nearby Fort Sumner.

Whether Salazaar was present to take a memento from his friend’s pocket or not is unknown, but it’s highly possible that he went to pay his respects to a friend he later called "the bravest man I ever knew".

The provenance of the banknote is equally enigmatic. Having been discovered by the late collector’s grandson, the note’s backstory and how it made its way from the Old West to the South West remains a mystery.

The note will be sold during East Bristol Auctions’ Military, History & transport Sale on February 24.