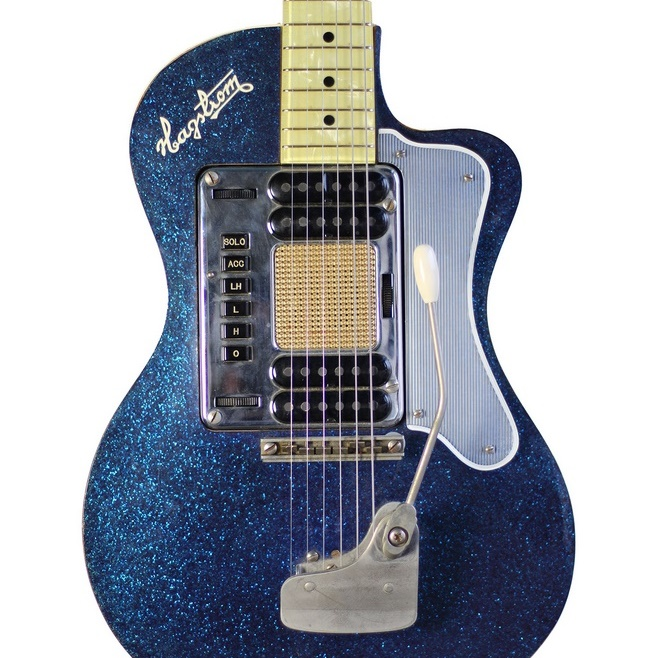 A guitar once owned by Kurt Cobain is set to raise money for charity in a special eBay auction this month.
The late Nirvana front man’s Blue Sparkle Hagstrom Deluxe electric guitar will be sold next week, in a sale commemorating his 50th birthday, and could fetch a six-figure sum.

Cobain acquired the guitar whilst in Seattle in 1992, when it was delivered along with a selection of similar guitars by Nirvana’s primary guitar technician Earnie Bailey.

He picked the Blue Sparkle Hagstrom Deluxe as a Christmas gift to himself, and Bailey then converted the guitar to a left-handed orientation for Cobain to play.

Following his tragic death in April 1994, the guitar was gifted by his wife Courtney Love to a close friend and fellow musician. It was later acquired by Nathan Fasold, owner of Black Book Guitars in Portland, Oregon, a vintage guitar shop which specializes in instruments with unique histories.

"The guitar has remained un-played for decades, still bearing the left-handed wear from its former owner," said Fasold. "When holding the guitar, it’s easy to imagine the songs Cobain could have created with it. It’s a true relic of the music icon."

Fasold has now teamed up with eBay for Charity to sell the guitar online, with a portion of the proceeds set to benefit Transition Projects, Inc. – a Portland-based nonprofit that helps more than 10,000 people every year transition from homelessness to housing in the Pacific Northwest.

Guitars owned by Cobain have become highly sought-after by collectors in recent years, and surviving examples are regarded as rare, due to his habit of smashing instruments on-stage during Nirvana gigs.

The current record price for a Kurt Cobain guitar was set in 2006, when his 1960 Mosrite Gospel Mark IV guitar sold at Heritage Auctions for $131,000. And in 2008, a stage-smashed guitar with Cobain’s handwritten inscription "If it’s illegal to rock and roll, then throw my ass in jail" was sold privately to a collector for $100,000.

"Connecting fans with authentic and rare collectibles like Cobain’s Hagstrom Blue Sparkle Deluxe is at the heart of eBay’s mission," said Sam Bright, Senior Director of Art & Collectibles at eBay. "The guitar represents the significant impact Nirvana continues to have on American rock history."