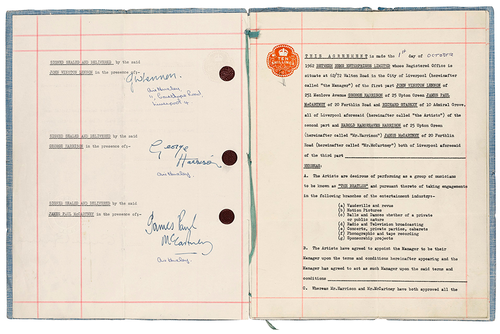 The signed contract which set The Beatles on course for stardom is heading for auction later this month.
The forthcoming Sotheby’s Rock and Pop sale in London will include the document which saw John, Paul, George and Ringo commit themselves to be managed by Brian Epstein.

Dated October 1, 1962, it was the first management contract signed by the final line-up of the band, following drummer Pete Best’s departure two months earlier. Days later the band’s first single Love Me Do was released, and Epstein’s masterplan for success swung into action.

The contract was signed in Epstein’s office in the NEMS shop in Whitechapel, witnessed by Epstein’s secretary Beryl Adams and co-signed by the fathers of Paul McCartney and George Harrison, as both were under the age of 21.

It appointed Epstein as The Beatles’ manager for five years, and stated he would be to be responsible for the band’s advertising, publicity, concert booking, recording sessions and advising “on all matters concerning clothes, make-up and the presentation and construction of the Artists’ acts and also on all music performed in the course of or in connection with such acts”.&nbsp;

Epstein once described the potential he saw in the band: “…I never thought that they would be anything less than the greatest stars in the world – and I mean that. I always knew that they were going to be tremendous … I sensed something big, if it could be at once harnessed and at the same time left untamed.”

“Without this contract, and the relationship it represents, it seems inconceivable that the Beatles could have achieved all that they did," said Gabriel Heaton, Sotheby’s Specialist in Books and Manuscripts. "It took more than inspired musicianship and song-writing to remake popular music. The presentation, direction, and internal harmony of the Beatles all owed a huge amount to Brian Epstein. He was, as Paul McCartney has acknowledged, the Fifth Beatle.”