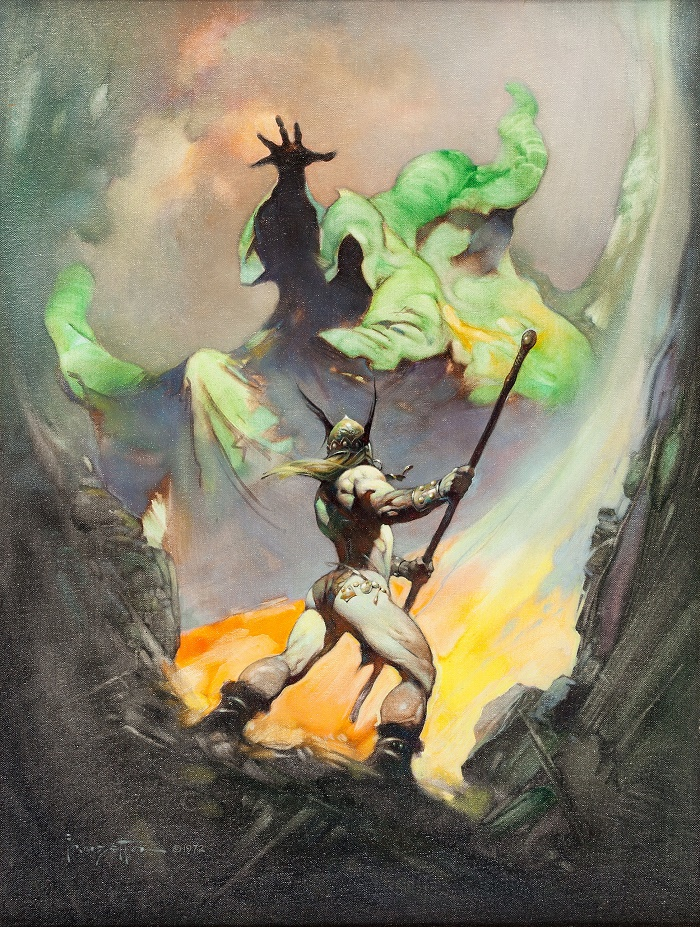 A masterpiece by the celebrated fantasy artist Frank Frazetta will lead the upcoming Heritage Auctions sale of comic book art in New York.
The original cover artwork for The Norseman, dating from 1972 features a muscular hero facing off against a mysterious, spectral figure. Described by Heritage as "quite possibly the finest Frank Frazetta painting we have ever brought to market", the artwork is expected to sell for more than $350,000.

"This image has all of the danger and drama you would expect in a Frazetta barbarian masterpiece," said Todd Hignite, Vice President at Heritage Auctions. "It was a personal favorite of Frazetta’s. He was very pleased with the contrapposto stance of the main figure, which imbues him with power, tension and vitality. Frazetta was always in search of ways to depict the human figure in action and here he felt he had triumphed."

Another standout lot is a piece of original Marvel comic book cover artwork by the legendary Jack Kirby. Although eventually unused, Kirby’s 1966 artwork for Fantastic Four #52 remains significant because it features the debut appearance of Black Panther, the first black superhero to appear in mainstream comic books.

With the character about to make his onscreen debut in Captain America: Civil War, before starring in his own movie in 2018, this culturally significant and stunning piece of vintage artwork comes with an estimate of $80,000+.

From comic books to comic strips, the sale also features a pair of original works by two of the masters: Charles Schulz and Bill Watterson.

The Schulz Peanuts strip, dating from August 8, 1953, is described as "one of the best original Peanuts examples to ever surface for auction", and Watterson’s strip is one of just a handful of Calvin and Hobbes examples ever offered for sale. Both are valued in excess of $50,000 each.

Further notable lots include Gil Kane and Dave Cockrum’s original cover art for X-Men #95; Gray Morrow’s cover art for Marvel Preview #4, featuring the first appearance of Star-Lord of the Guardians of the Galaxy; and a rare piece of Lou Fine artwork for the cover of Hit Comics #6 featuring the Red Bee, dating from 1940.

The Heritage Auctions’ Comics & Comic Art Signature Auction takes place on May 13-14 at the Waldorf-Astoria in Manhattan.