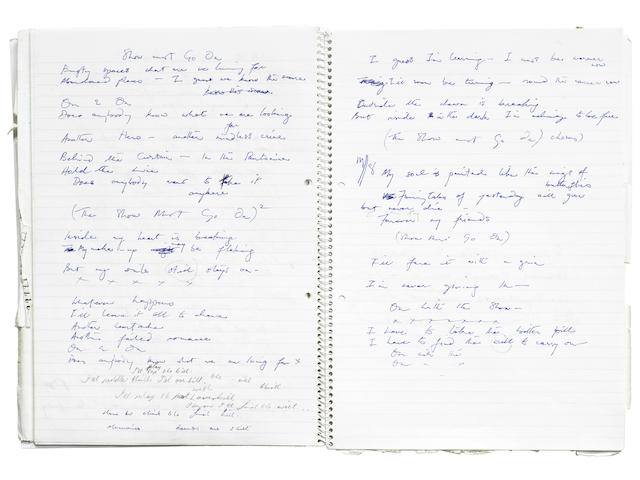 A notebook filled with Freddie Mercury’s handwritten lyrics will be offered for sale at Bonhams later this year.
The highly rare notebook was used by the late Queen front-man between 1988 and 1990, during the final years of his life as he battled HIV.

"Freddie Mercury was a brilliant musician, lyricist and performer," said Katherine Schofield, Bonhams Head of Entertainment Memorabilia. "He once said of himself, ‘I am not going to be a star. I’m going to be a legend’, and indeed that’s what he became.

"The notebook was used by Freddie for writing his own songs, as well as noting down the words to songs written or co-written by guitarist Brian May. The lyrics, such as for Too Much Love Will Kill You, and The Show Must Go On, are both beautiful and sad, as on reflection, we know Mercury was battling HIV at the time. This knowledge makes the words all the more poignant."

The Show Must Go On, mainly written by Brian May, spoke of Mercury’s struggles to continue recording as his illness took its toll.

"I sat down with Freddie, and we decided what the theme should be and wrote the first verse," writes May. "It’s a long story, that song, but I always felt it would be important because we were dealing with things that were hard to talk about at the time, but in the world of music, you could do it."

May later told Rolling Stone magazine: "I said, ‘Fred, I don’t know if this is going to be possible to sing. And he went, ‘I’ll f*&@ing do it, darling’ vodka down and went in and killed it, completely lacerated that vocal."

The song was eventually released just six weeks before Mercury died, and later spent five weeks in the U.K charts.