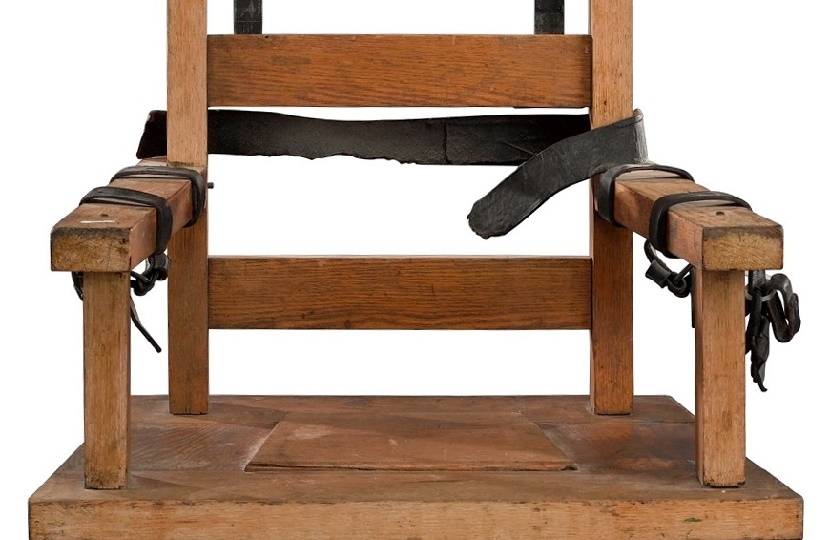 Although many electric chair offered for sale are movie props, this one is believed to be the genuine article (Image: Heritage Auctions)

Bidders at an upcoming Heritage Auctions sale could be in for a shock – quite literally – when an antique electric chair goes under the hammer.

The Americana & Political sale in Dallas on August 25 will feature the piece of macabre memorabilia, which is said to originate from a prison in Pennsylvania.

The chair is said to date from the early 20th century, and is expected to sell for more than $10,000.

According to the auction house, the majority of electric chairs that find their way onto the open market are reproductions, originally built for use as props in movies or haunted house attractions.

However, the example currently up for sale appears to be the real deal.

“Over the years we have seen several purported electric chairs, one of which we even owned briefly,” said Heritage in a statement. “However, one was never certain that any of these three were authentic or merely movie props.

“But the chair offered here appears in every way utterly authentic. Its fittings are correct and the entire unit has a consistent patina of age and use that would be all but impossible to fabricate.”

One of the more unpleasant features is the addition of a removable panel in the seat, beneath which a bucket would have been placed, as prisoners would usually evacuate their bowels whilst being electrocuted.

Another detail which adds to the chair’s authenticity is the lack of a metal cap, which would have been placed over the prisoner’s head to deliver the fatal current.

Although many reproduction chairs have these caps for visual effect, in reality they were never integral parts of the chairs themselves, and were plugged directly into a power source on the wall.

Rather grimly, the term “patina of use” suggests the chair was indeed used to execute prisoners in the early part of the 20th century – although its exact history remains unknown.

The story goes that it originally belonged to a retired Pennsylvania prison guard, who acquired it around 1940 when it was replaced with a new chair.

It was later picked up at a local auction by the current consignor, and will now hit the block in Dallas in search of a new home

And if the chair isn’t enough to satisfy those collectors with a taste for the dark side, the sale will also include another equally deadly executioner’s tool – a fully operational guillotine.

Standing almost nine feet tall, and made from stained hardwood with a 40lb metal blade, the imposing implement of death is thought to date from the first quarter of the 20th century.

As the guillotine was never used as a method of execution in the United States, the device is suspected to originate from France or one of the French colonies of Africa.

Whatever its history, the guillotine is thought to be one of just a handful ever offered for sale in the U.S, and is described as “an obviously very rare item for the unconventional collector”.

It’s estimated to sell for upwards of $12,000 – but could go far higher, if bidders lose their heads.