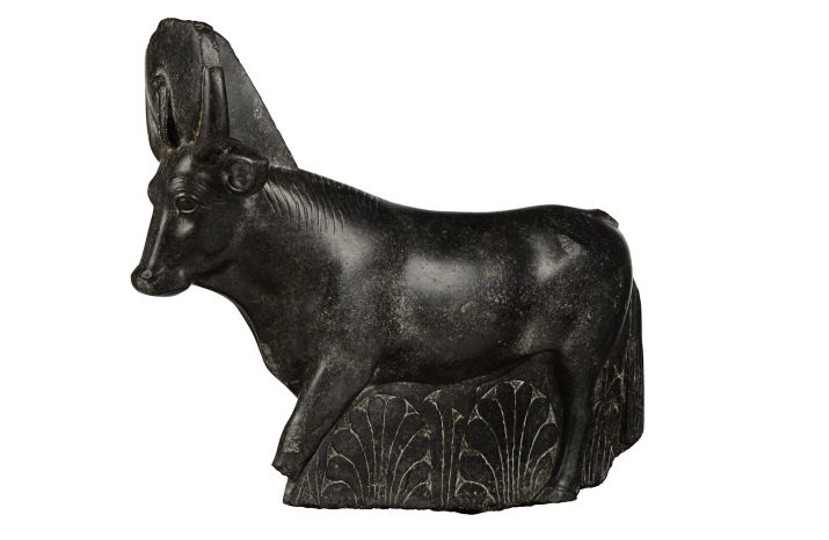 An ancient Egyptian black grandiorite sacred Apis bull is heading to auction in Christie’s April 15 Antiquities sale in London.
There’s no estimate available for the lot, but the rarity and quality means it’s likely to sell for a sum in the low millions.

The piece is from the Late Period (664-332 BC), the final three centuries before the kingdom was conquered by Alexander the Great.

Apis was an Egyptian bull deity, seen as a messenger between humans and the other gods.

A real bull would be chosen as his earthly manifestation and selected using a distinct set of criteria. It needed to have a scarab mark on its tongue and a white triangular mark on its forehead, among other markings. Once found, it would be housed in the Apis sanctuary in Memphis and worshipped until its death (then the process would be repeated).

The stone this statue is carved from, grandiorite, is rare – occurring only in Egypt and parts of the US. This same material was used to make the Rosetta Stone.

“The luxuriousness of the stone, with its beautiful black, rich colour, makes a huge statement,” says Christie’s expert Hannah Fox Solomon. “You want to run your hands over its surface. The bull symbolised power and sexual potency in ancient Egypt, making it the perfect icon for a deity.”

The value of the best quality ancient Egyptian sculptures has been growing markedly over the last few years, culminating in the £15.7m ($22m) record set for a statue of a scribe named Sekhama at Christie’s in 2015.

Solomon said: “People now more than ever understand the importance that ancient sculpture has played in forming the aesthetic of everyone from Giacometti to Basquiat.

“As a result, they are coming to us to find works that complement their 20th-century collections.”