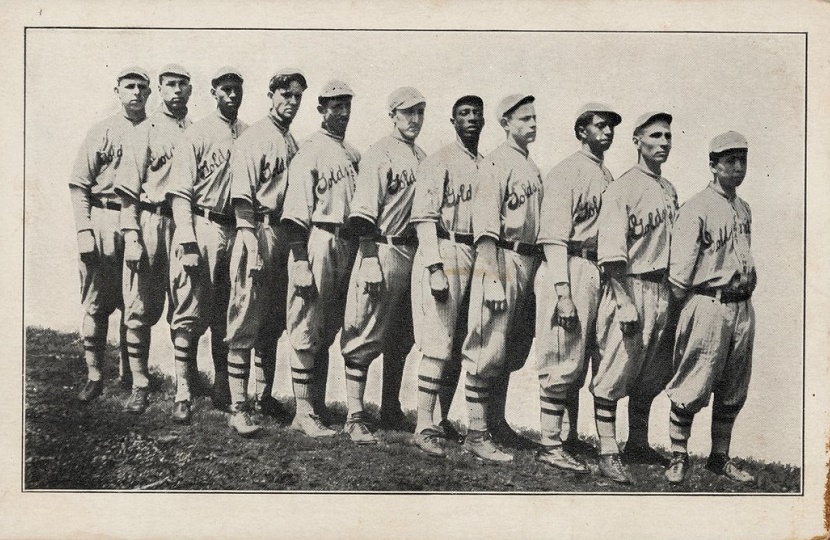 A remarkable artifact commemorating America’s first multi-racial barnstorming baseball team is heading to auction for the first time next week.

The 105-year-old postcard depicts the All-Nations Baseball Club, a groundbreaking team which featured both black and white players from the U.S, Hawaii, Japan, Cuba, the Philippines, China and India.

The significant piece of history from the early days of baseball is expected to sell for $10,000 -$20,000 when it comes up for sale at Hake’s Americana on July 11.

According to the auction house, the sale will mark the first time an original All-Nations promotional card has been offered at public auction, making it a rare opportunity for collectors and baseball historians alike.

Established in Iowa in 1912, during a period of strict racial segregation in both baseball and wider U.S society, the All-Nations club broke the color barrier in every way possible.

The team was the brainchild of J. L. Wilkinson, future Hall-of-Famer and owner of the Negro league Kansas City Monarchs. Having initially found success with a barnstorming women’s baseball team in 1909, he then assembled a team of talented ball players of every nationality.

The All-Nations travelled around the American Midwest in a $25,000 Pullman train car, took their own bleachers for fans, and slept in tents pitched on the baseball field before games.

They also brought with them a dance band to play before games, professional wrestlers to entertain the crowds, and developed an innovative portable lighting system that allowed them to play night games for the first time.

The postcard offered at Hake’s Americana dates from the 1913 season, as manager and co-founder J.E. Gaul sought to attract publicity and improve the team’s finances.

The print and Gaul’s signature on the reverse shows it was issued as a season-long press pass to a reporter, allowing them to attend every game for free in return for spreading the word: the incredible All-Nations are coming to town!

As a team they were renowned for sweeping their opponents aside wherever they travelled, racking up 92 wins against only 22 losses in 1912, and ending the 1913 season with a record of 124-17-4.

The All-Nations’ star player was undoubtedly John Donaldson, regarded by many as perhaps the greatest pitcher of his era in the whole of baseball.

According to a 1915 newspaper report on the team, New York Giants Manager John McGraw was quoted as stating: “If Donaldson were a white man, or if the unwritten law of baseball didn’t bar Negroes from the major leagues, I would give $50,000 for him—and think I was getting a bargain.”

Donaldson is pictured in the team photograph (third from right), along with fellow star pitcher Jose Mendez (seventh from right), a Cuban player known as the ‘Black Diamond’ who was elected to the U.S Hall of Fame in 2006.

Many of the All-Nations’ best players were drafted during WWII, and in 1915 Wilkinson moved the rest of the team to Kansas, as they continued to wow the crowds throughout the Midwest.

When his players returned after the war, they were also recruited to Wilkinson’s newly-formed Kansas City Monarchs, one of the charter members of the Negro National League established in 1920.

The two teams operated side by side, with many players appearing for both in alternate games. Donaldson pitched for the Monarchs throughout the 1920s, but still continued his barnstorming career, and Mendez later managed the Monarchs from 1923 until 1926.

Today the Kansas City Monarchs are regarded as one of the most important baseball teams in Negro League history, with a past roster that includes legends Satchel Paige and Jackie Robinson – but it all began with a barnstorming crew from Des Moines, Iowa.

For J.W Wilkinson, the idea that players of every color and nationality could join together as a team began as a simple gimmick to sell tickets.

But today, 105 years on, the groundbreaking equality of the All-Nations team looks more like a blueprint for how baseball should truly be played, and why the sport remains known as America’s Favorite Pastime.