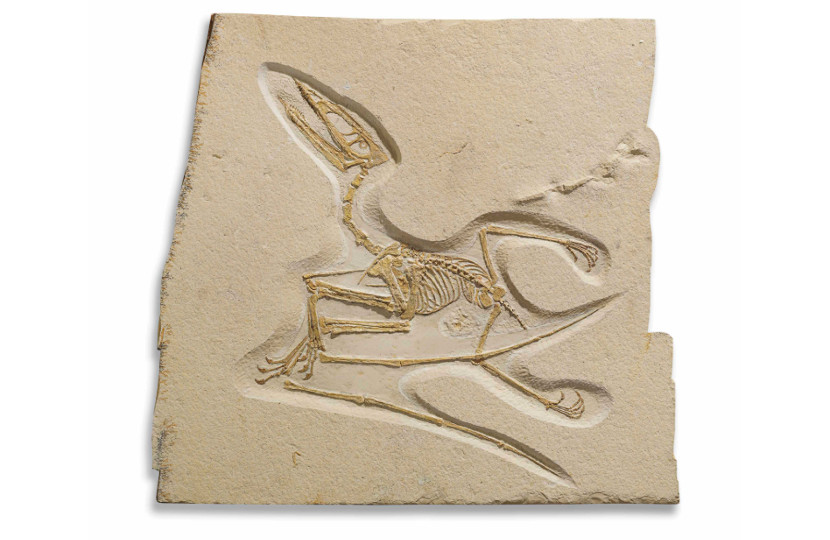 This extraordinary Germanodactylus cristatus pterosaur was discovered in Solnhofen, Germany – one of the richest fossil hunting grounds in Europe.

Germanodactylus cristatus was first classed as a pterodactyl on its discovery in 1901, but was reclassified by palaeontologist Yang Zhongjian in 1964. Very few fossils have ever been found, with only four to be found in museums around the world. This example has the largest known wingspan (21.6 inches across).

During the Jurassic period the Solnhofen region was an archipelago made up of a series of lagoons. This creature would have fallen into one of these slow flowing water bodies and been gradually covered over with silt.

These large, long tailed pterosaurs likely subsisted on a diet of fish. They were extremely light and agile, but seem to have done most of their hunting while swimming.

James Hyslop, head of science and natural history at Christie’s, said of the specimen: ‘This is the real Jurassic Park.

“Most fossils that you find are fragmentary but this is about 98 per cent complete.”

Lastly we have a large fossilized crocodile found in Holzmaden, Germany, which carries an estimate of £70,000-100,000 ($92,600-132,286). It may come as a surprise that crocodiles lived in Germany once, but at the time the planet was split into two landmasses – each of which had a lush tropical climate.

Crocodiles are among the oldest animals on the planet, having evolved to their present form around 200m years ago. They’re one of the few large creatures to have survived the extinction event at the end of the Cretaceous period (around 66 million years ago).