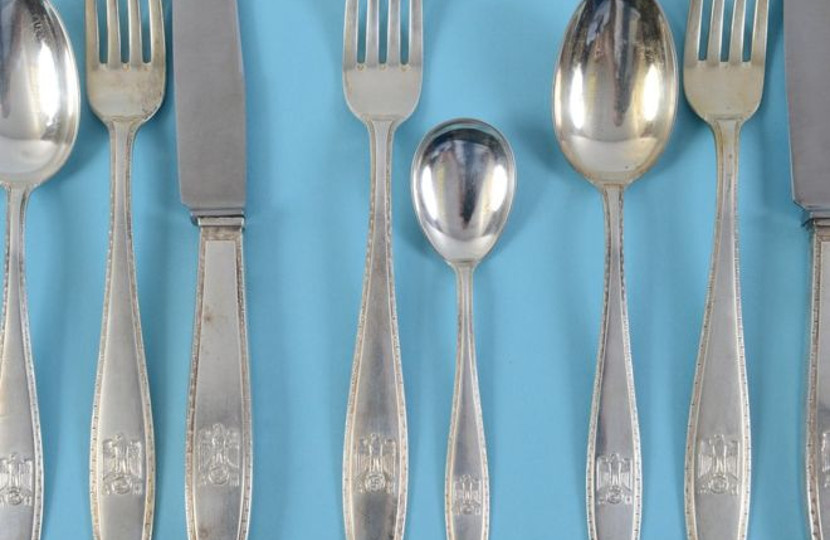 Around 3,000 pieces of silver tableware were produced for Hitler's birthday (Image: Charterhouse Auctioneers)

A set of silver cutlery made to mark Adolf Hitler’s 50th birthday turned up at an auction in Dorset, UK this week.

Each of the three forks, two knives and three spoons bears the Nazi eagle logo along with the initials “A H” at the base of the handle.

Richard Bromell of Charterhouse Auctioneers told the BBC: “About 3,000 pieces were produced for Hitler’s 50th birthday. This is the first set I have seen in 33 years.

“It’s a niche market – some people will have interest, others will not – but it’s a big part of modern history.”

Hitler’s 50th birthday was celebrated across Germany (and by his sympathisers abroad) on April 20, 1939.

That date puts it six months before the invasion of Poland, which began the second world war. Hitler was at the height of his powers and this was reflected in the extravagance of the pageantry. Platoons of jackbooted SS soldiers marched down Berlin’s Unter den Linden, while hundreds of fighter planes screamed overhead. Germany’s neighbours watched on nervously.

Around 3,000 pieces of cutlery were made for the event by German silversmith Bruckmann & Sohne.

This set was found during the estate clearance of a former British Army officer, who brought them home as a souvenir after the war. The sale of Nazi memorabilia is hugely controversial and many auction houses don’t touch it due to concerns over glorifying fascism.

On the other side, it’s argued that this was a huge moment in history and the proceeds from the sale (in this case) will be going to the relatives of a soldier who actively fought against the Nazis.