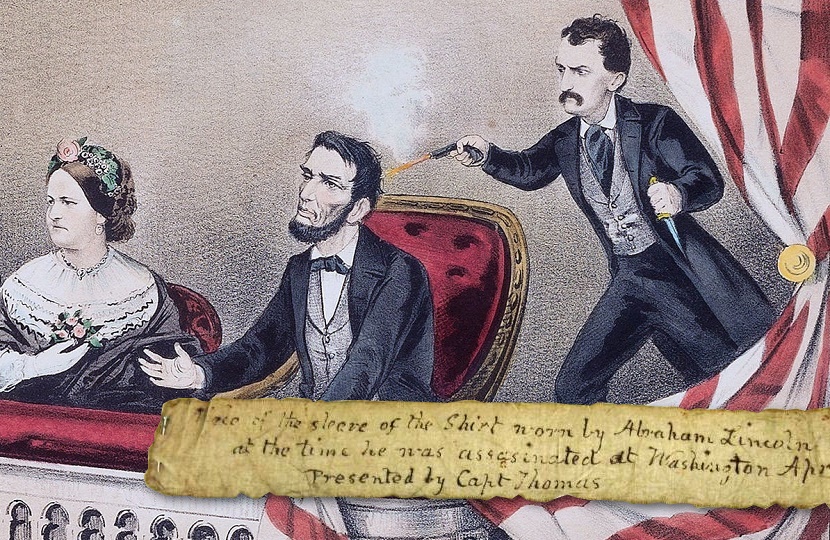 A fragment of Abraham Lincoln's bloodstained shirt, removed by surgeons after he was shot by John Wilkes Booth (Image: Wikipedia / University Archives)

A piece of Abraham Lincoln’s bloodstained shirt from the night he was assassinated is heading for auction in Connecticut this month.

The historic fragment of cloth will be offered for sale by Westport memorabilia specialists University Archives on August 22, and is expected to sell for $25,000 – $30,000.

During the final days of the U.S Civil War, President Lincoln was shot on April 14, 1865 by John Wilkes Booth during a visit to Ford’s Theatre in Washington, D.C.

The mortally wounded President was carried across the street to the Peterson Boarding House, where surgeons removed his blood-soaked shirt and jacket and attempted to save his life.

Their efforts were in vain, and he died the next morning at 7:22 a.m. News of his death spread quickly, and as the nation mourned several of those present at Lincoln’s death took pieces of the shirt to remember him by.

These so-called ‘blood relics’ from Lincoln’s assassination have been sought-after by collectors ever since his death, and today just a few remain in private hands.

The fragment up for grabs at University Archives is one of the largest ever offered, measuring 10″ long, and bears the inscription “Piece of the sleave [sic] of the Shirt worn by Abraham Lincoln at the time he was assassinated at Washington April 13th 1865”.

Following Lincoln’s death, the bloodied fragment was acquired by Captain Daniel G. Thomas (1831-1870), who served as military storekeeper in charge of clothing in the quartermaster’s department.

Thomas was part of the group of military officers who escorted Lincoln’s body from Peterson House back to the White House, as the rain poured down and the city’s church bells rang out.

Thomas later gave the relic to a friend or acquaintance, a gift marked by the inscription “Presented by Capt Thomas”.

The bloodied cloth is offered along with a copy of The Obsequies of Abraham Lincoln, in the City of New York, printed in 1866, in which it has remained pinned to page 120 for several years.

Lincoln assassination relics, particularly those with superb provenance, fetch large sums on the rare occasions they appear at auction.

Two of the most notable sales came back in November 2008 at Heritage Auctions, when half of Lincoln’s blood-stained collar and his shirt cuff sold for $65,725 and $23,900 respectively.

The cuff originated from the collection of John T. Farnham, a clerk in the Adjutant General’s office at the time of Lincoln’s death, and was inscribed in the same hand as the example offered at University Archives.

Both fragments were also initially inscribed with the same incorrect date, April 13, a consistent in-period mistake that adds to the provenance of the piece (although the Farnham fragment was later corrected to read “April 14th“.

Blood relics from Lincoln’s death aren’t only confined to the President’s own clothing, the most notable being the dress of stage actress Laure Keene.

Immediately after he was shot, Lincoln was attended by Keene, who playing the lead role in Our American Cousin at Ford’s Theatre.

As John Wilkes Booth fled the theatre in chaos, she rushed from the stage to see the president, and cradled his head in her lap as he lay dying.

Pieces of her blood-stained dress quickly became sought-after relics, and five examples are known to exist to this day, including her sleeve cuff which can be found on display at the National Museum of American History in Washington, D.C. 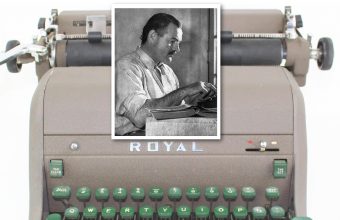