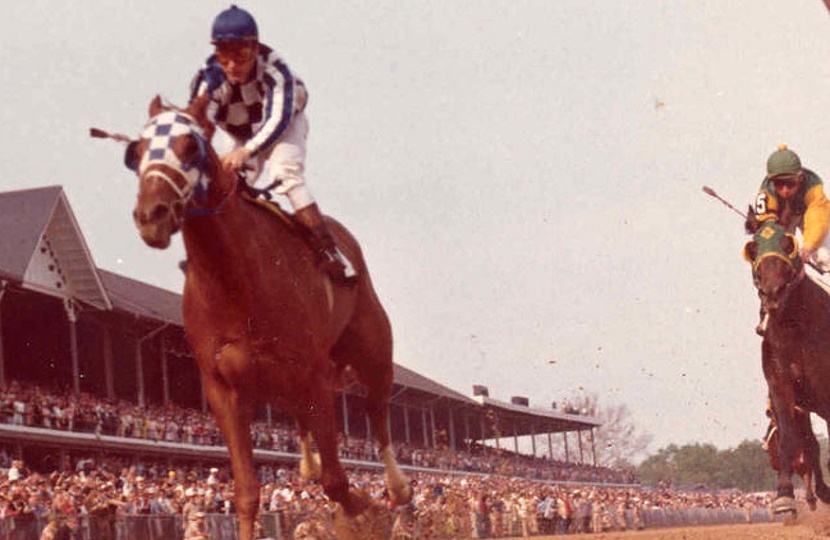 Secretariat crosses the finish line at the 1973 Kentucky Derby, setting a record that still stands to this day (Image: The Kentucky Derby)

A horseshoe worn by Secretariat during his legendary victory in the 1973 Kentucky Derby is up for auction at Leland’s this month.

Bidding on the historic shoe has already surpassed $20,000, and is expected to soar far higher before the online sale ends on August 17.

In 1973 Secretariat made history by becoming the first Triple Crown winner in 25 years. Each of his victories in the Kentucky Derby, Preakness Stakes and Belmont Stakes set new speed records, and he is widely regarded as the greatest horse in American racing history.

“Of the nearly 1,900 horses who ever participated in the Kentucky Derby during the course of its 144-year history, this treasured artifact was worn in the electrifying racing performance that remains the fastest of them all,” said the auction house.

“The rarity and significance of this shoe along with the magnitude of its offering simply cannot be overstated.”

The shoe originates from the collection of Secretariat’s owners, the Chenery/Tweedy family, who received it from Hall of Fame trainer Lucien Laurin after the famous victory at Churchill Downs.

Having spent the past 45 years tucked away in the family’s private Meadow Stable collection, Secretariat’s horseshoe is now on the open market for the first time.

In the summer of 1973, Secretariat etched himself into American sporting history, starting at the world’s most famous race: The Kentucky Derby.

Starting from the rear of the field in 10th place, Secretariat made an incredible charge for the finish line during the final straight, finally surging past the second-favorite Sham to win by 2 ½ lengths.

“…all of a sudden there was this, like, just a disruption in the corner of your eye, in your peripheral vision,” recalled sportswriter Mike Sullivan, who witnessed the race. “And then before you could make out what it was, here Secretariat came. And then Secretariat had passed him.

“No one had ever seen anything run like that – a lot of the old guys said the same thing. It was like he was some other animal out there.”

Remarkably, Secretariat ran quarter-mile faster than the last throughout the race, meaning he was actually accelerating as he crossed the finish line.

His final time of 1:59 2/5 set a new track record which remains unbeaten almost 50 years on, and since then just one other horse has ever won the derby in under two minutes (Monarchos, in 2001).

Secretariat followed the derby with a win at the Preakness Stakes, making headlines across the U.S and transcending racing to become a cultural phenomenon.

And he completed the Triple Crown with a landmark victory at Belmont, winning by a margin of 31 lengths and achieving a time of 2:24 flat – the fastest 1 ½ miles ever run on dirt by an American racehorse.

Artifacts from Secretariat’s career are amongst the most sought-after pieces of racing memorabilia money can buy.

All three of these sales were hosted by Lelands in 2017, and it seems the company is set to build on the growing market for horse racing memorabilia with another strong offering later this month.