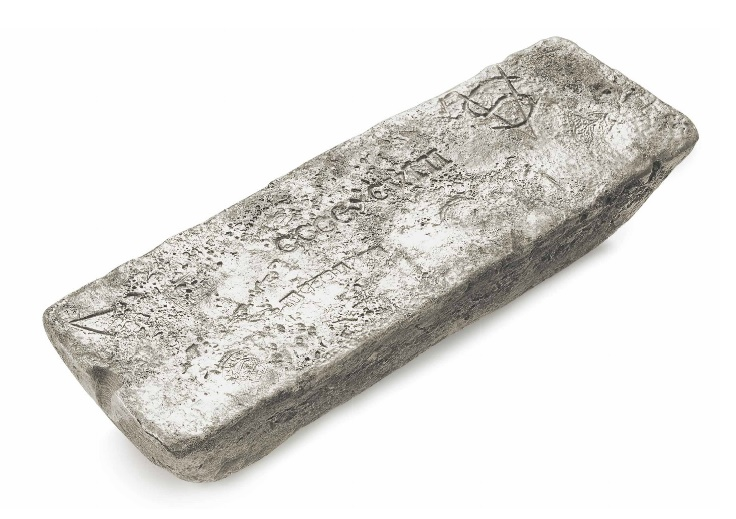 A huge bar of silver recovered from a 17th century shipwreck is amongst the treasures of a Christie’s auction in New York next week.

The 79 Troy pound silver bar was originally part of a cargo of gold, silver, copper, tobacco and precious jewels which was famously lost in 1622, when the Spanish fleet encountered a storm off the Florida Keys.

For more than two centuries Spanish colonialists led the expansion into the New World, and between 1561 and 1748 the government sent two fleets a year to the Americas, setting out with supplies and returning laden with treasure.

During one particular return voyage September 6, 1622, the Spanish fleet was struck by a hurricane in the Florida Keys and the Nuestra Senora de Atocha sank, taking her cargo and most of her passengers to the bottom of the ocean.

“The Atocha was so richly-laden with treasures that it had taken two months to load, and it left port at Havana six weeks later than scheduled,” said Christie’s specialist Jill Waddell.

“It was the most heavily guarded ship in a fleet of 20, and was carrying clergymen, slaves and members of the Spanish nobility. When a hurricane struck, the boat was slammed into a reef, sinking in just 55 feet of water. Just five of those who had been on board survived.”

The silver bar even bears the mark of the ship’s silver master Jacove de Vreder – one of the unfortunate crew members who lost their lives in the storm.

The Spanish government later spent years trying to recover the sunken ship and its valuable hoard, with countless Indian slaves killed during the attempts, but to no avail.

The partial wreck of the Atocha was finally discovered in 1985 by professional treasure hunter Mel Fisher, a former chicken farmer from Indiana, who had spent 15 years searching for it in the Florida Keys.

In 1992, following a lengthy legal battle against the State of Florida, the U.S. Supreme Court awarded Fisher the sole rights to all treasure found on the ship.

And although part of the ship containing much of the most valuable gold and emeralds has never been found, in 2014, the Atocha was listed by the Guinness Book of World Records as the most valuable shipwreck ever recovered – with its cargo valued at an estimated $400 million.

“Having lain at the bottom of the ocean, this silver bar is perfectly preserved,” said Waddell. “In person, it looks like it fell off the moon. It’s got this wonderful, deep-grey, craggy surface, and the marks remain deep and clearly legible.

“It’s one of the more amazing things I’ve handled in my career, and captures a remarkable moment in history.”