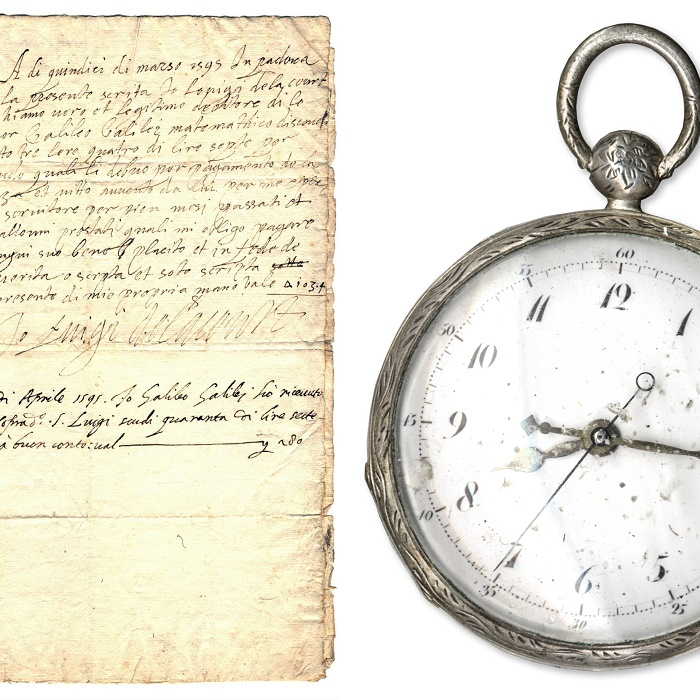 Historic rarities including Galileo’s autograph and a pocket watch owned by Napoleon lead the current sale at Nate D. Sanders.
Galileo Galilei (1564-1642) was an Italian polymath, whose work as an astronomer, physicist, engineer, philosopher, and mathematician led him to be regarded as the ‘Father of Science’.

Galileo’s controversial theories of Heliocentrism, in which the planets of the solar system revolve around the sun, contradicted both common wisdom of the period and the teaching of Holy Scripture, and he was investigated by the Spanish Inquisition.

The Inquisition found him guilty of heresy in 1633, forced him to recant his beliefs, and sentenced him to house arrest, where he remained for the rest his life until his death in 1564.

The remarkably rare document features Galileo acknowledging a debt repaid to him, and reads (in part):

"On the 13th day of April 1595, I, Galileo Galilei have received from the above mentioned Mr. Luigi forty scudi of seven lire."

Mr Luigi himself writes: "… I, Luigi de la court, name myself true and legitimate debtor of Signor Galileo Galilei, mathematician for one hundred three scudi four lire, for the account which I owe him for the payment of the room and board that he has consigned to me and my servant by past promises and sworn oaths which oblige me to pay for all his good and tranquillity…"

Documents bearing Galileo’s handwriting are considered extremely rare, and this example – described as the very earliest known – is expected to sell for more than $1 million.

Another important and historic artefact on offer is a pocket watch given by Napoleon Bonaparte to his protégé, Baron Rene-Nicolas Dufriche Desgenettes.

Desgenettes led the French Army’s department of medicine during the Napoleonic era, and was given the title of Baron of the French empire by Napoleon in 1810. Having originally been part of the collection of the Monaco royal family, the silver and vermeil watch dates from 1812 and is estimated at $20,000+.

Further treasures in the sale include an incredibly rare 1494 Basel edition of Christopher Columbus’ letter to Ferdinand and Isabella, announcing his discovery of the new world, estimated at $750,000+; Sigmund Freud handwritten physician’s oath, signed and dated April 30, 1883, estimated at $195,000+; and a set of Don McLean’s handwritten lyrics from the classic song American Pie, valued at $100,000+.

Bidding in the online auction ends on January 26.