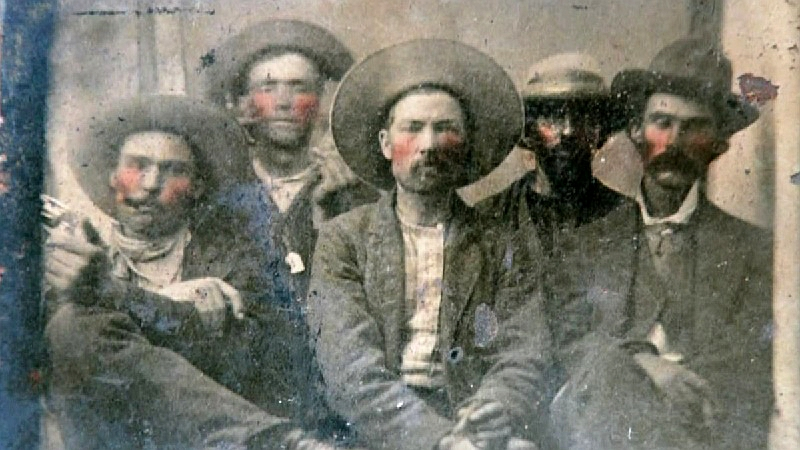 A photograph featuring legendary outlaw Billy the Kid and the man who killed him, Pat Garrett, has been discovered at a flea market in North Carolina.

The tintype photograph was originally purchased in 2011 by lawyer Frank Abrams for just $10.

He had no idea of who the five men in the photograph were, and simply wanted a cool piece of Old West memorabilia to hang in his guest room.

But in 2015, another rare Billy the Kid photograph came to light when it featured in a TV documentary on the National Geographic Channel.

Abrams watched the program, and decided to take another look at the photo. After a little research, he realized that his $10 photograph could actually be a historic treasure worth millions.

He then began a mission to have the photograph authenticated, involving historians, professors and experts in everything from handwriting to facial recognition.

Five cross-country trips later, he had his proof. Experts concluded he had found the only known photo featuring history’s most famous outlaw and the sheriff who shot him down.

The photograph is believed to have been taken between 1875 and 1880, when Billy and Garrett were friends who gambled in the same New Mexico saloon.

However, when Garrett was elected Sherriff of Lincoln County in 1880, he warned Billy to leave the territory, or he would be forced to hunt him down.

When Billy continued his crime spree, Garrett arrested him and sentenced him to hang for a previous murder.

Billy escaped custody in December 1880, killing two sheriff’s deputies in the process, and evaded capture until July 1881, when Garrett finally tracked him down and shot him in the heart.

Just two other photographs of the infamous outlaw are known to exist.

The first was a portrait taken in Fort Sumner, New Mexico, circa 1879-1880, and gifted by Billy to his cattle rustling partner Dan Dedrick.

The unique tintype photo passed down through Dedrick’s descendants until 2011, when it sold at auction for $2.3 million, making it the world’s most expensive photograph at the time.

The second was discovered in 2010 by collector Randy Guijarro, who bought it for just $2 from a box of junk at an antique shop in Fresno, California.

Closer inspection revealed that the small tintype photograph depicted Billy the Kid playing croquet with two other members of his gang, during a wedding celebration in New Mexico in 1878.

Guijarro then spent the next five years having the photograph authenticated by a series of experts, before it was valued at $5 million.

Although an exact price has yet to be placed on the newly-discovered photo, its value is believed to be in the millions.