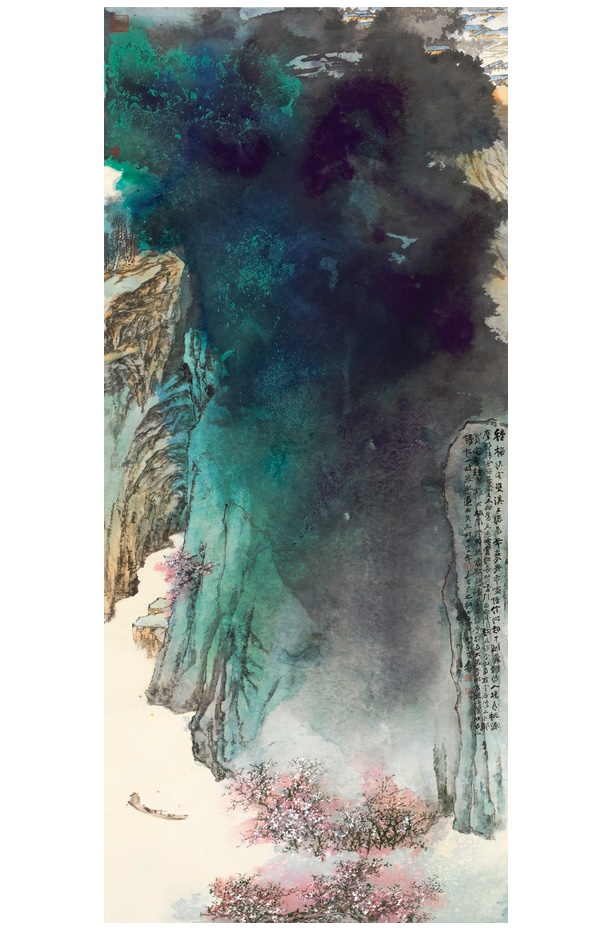 A masterpiece by the celebrated Chinese artist Zhang Daqian has sold for a world record price at Sotheby’s.
The hanging ink scroll entitled Peach Blossom Spring sold for a stunning HK$270,680,000 (US$34,901,479), more than four times its top estimate, at the company’s evening sale of Fine Chinese Paintings in Hong Kong.

The artwork was bought by the Long Museum in Shanghai, a private museum owned by Chinese billionaire Liu Yiqian and his wife, Wang Wei.

In recent years the couple have made waves in the market with major acquisitions including the Amedeo Modigliani painting Nu Couche (Reclining Nude) for $170.4 million, and the Chenghua porcelain ‘chicken cup’ for $36 million.

Zhang Daqian had created Peach Blossom Spring in 1982, after relocating from the U.S to Taiwan in search of a more peaceful existence. However, having settled in a quiet neighbourhood, he watched it grow around him into a bustling suburbia, inspiring him to inscribe the work with this poem:

"Planting plum trees upon the twin streams,
I grew old and weary of the noisy city;
Who can believe when A Chao arrived,
That earthly Peach Blossom Spring was just a dream"

The work had previously set a world record price for a modern Chinese painting back in 1987, when it sold at Sotheby’s in Hong Kong for $1.87 million (US$240,000). Almost thirty years on, and despite current uncertainty in the Chinese art market, the value of the scroll has now increased by a remarkable 14,442%.

"Our carefully-curated sales attracted active bidding from collectors across China, Taiwan, Hong Kong, Southeast Asia and abroad, which is testament to a stable and healthy market," said C.K. Cheung, Head of Sotheby’s Chinese Paintings Department. "Highlight of this season is Zhang Daqian’s Peach Blossom Spring that set a world record for the artist at HK$271 million. Other works by the artist also performed well, with all 23 works being sold."