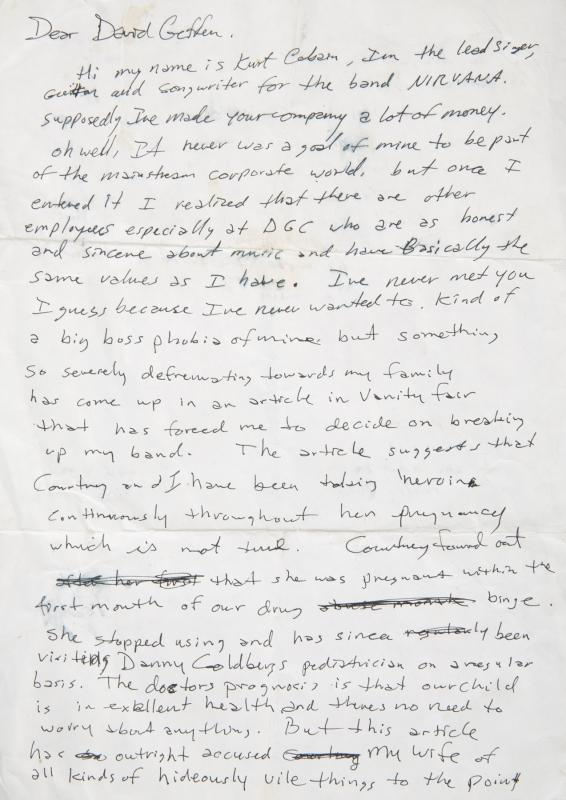 A letter from Kurt Cobain to his record label, defending his wife Courtney Love and threatening to break up Nirvana, is going up for auction in New York next month.
The letter was written in September 1992, following the publication of an article about Cobain and Love in Vanity Fair magazine.

The article by Lynn Hirschberg alleged that the couple had gone on a month-long drugs binge whilst Courtney was pregnant with their daughter, and quoted an anonymous "business associate" of the band who claimed "It was horrible. Courtney was pregnant and she was shooting up. Kurt was throwing up on people in the cab. They were both out of it."

Kurt was furious, calling the article a "crucifixion", and wrote to record label boss David Geffen himself for help with the matter.

The letter begins "Hi, my name is Kurt Cobain, I’m the lead singer, guitar[ist] and songwriter for the band Nirvana. Supposedly I’ve made your company a lot of money."

"Something so severely defremating [sic] towards my family has come up in an article in Vanity Fair that has forced me to decide on breaking up my band."

He states that that Love stopped using drugs as soon as she discovered she was pregnant, and that he has himself been in rehab:

"The doctor’s prognosis is that our child is in excellent health…but this article has outright accused my wife of all kinds of hideously vile things…the woman’s entire objective was to harm Courtney, and now after your read the article (I hope) something may be done about it."

"I’m so extremely pissed off about this piece of trash journalism that I’ll lay anything on the line for the love of my wife and my daughter."

The letter also sees Cobain speak candidly about his own drug use, saying "I’ve never admitted to using drugs in articles because I don’t want my fans to do the same."

"I am now in rehab going on 18 days and I’m really looking forward to having a family at this point, fuck Nirvana."

The highly rare letter, which offers a remarkable insight into Cobain’s protective nature towards his wife and family, is expected to sell for $20,000-$30,000 when it cross the block at Julien’s Auctions on May 21 at the Hard Rock Cafe in Times Square.