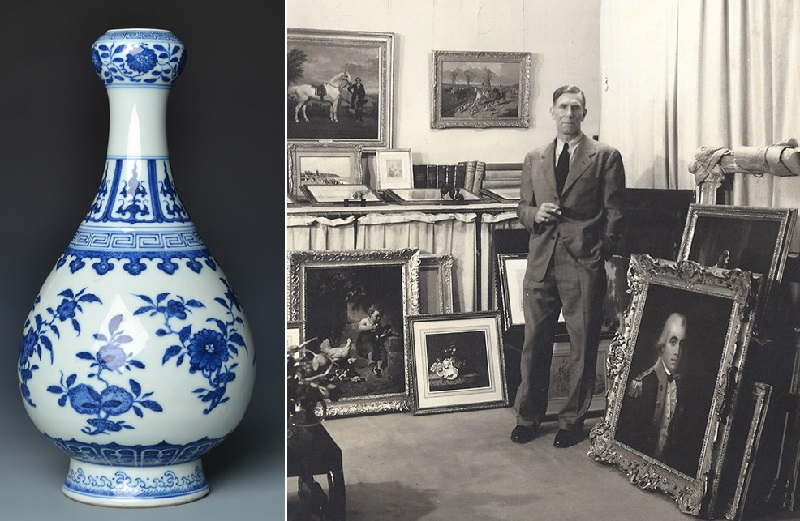 A rare Chinese vase once owned by a flamboyant WWII Spitfire pilot is heading to auction in Cornwall next month.
The vase was originally owned by Cecil Doward, the art dealer-turned pilot described as a “real life Biggles, and will be offered by David Lay at the Penzance Auction House with an estimate of £8,000-£12,000.

Prior to the war Doward, known to his friends as ‘Mickey’, had lived the high life, always traveling in First Class cabins between his offices on East 56th Street, New York and London in Old Bond St.

During WWII he led an equally dashing existence, training as a fighter pilot and serving as a Squadron Leader out of Biggin Hill airfield.

After the war he returned to his former career, becoming an expert in the work of Gainsborough and even discovering one of the artist’s lost masterpieces at auction in New York.

The blue and white garlic mouthed bottle vase dates from the Daoguang period (1821-1850), and is finely decorated in the 15th Century Ming style, with symbolic plants and fruits, pomegranate, peach, peony & chrysanthemum.

Having remained in the collection of Doward’s family since he passed away in 1967, the vase is sure to attract collectors from both home and abroad when it crosses the block on March 10-11.

Further notable lots in the sale will include a set of four Chinese Republican period porcelain famille rose enamelled panels, estimated at £6,000-£7,000; a Chinese Yongzheng white porcelain moulded lotus flower bowl in Ming Yongle style, valued at £2,000-£3,000; and a remarkably rare collection of early Chinese photographs, some dating back to 1908, taken by an Englishman who lived and worked in China for Standard Oil.