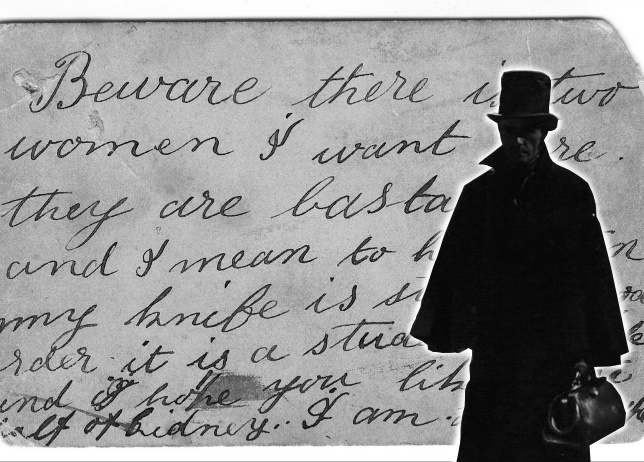 A sinister note claiming to be from Jack the Ripper will be offered for auction next month.

The handwritten postcard originates from the original Ripper case file and spent more than 80 years in the Metropolitan Police archive.

"Beware there is two women I want here they are bastards, and I mean to have them with my knife is still in good order it is a students knife and I hope you liked the half of kidney. I am Jack the Ripper."

The postcard was sent to Ealing Police Station less than two weeks before the murder of Mary Jane Kelly on November 9 – the fifth and final victim of the Ripper’s grueseome crimes.

It was one of numerous notes sent to police throughout the investigation, taunting the authorities and confessing to the gruesome murders.

Most were instantly dismissed as hoaxes, but some were convincing enough to be kept on file as evidence.

Long after the official case was closed, this postcard was given as a leaving gift to John Hall, an officer with the Metropolitan Police who retired from the force in 1966.

It was recently rediscovered by his widow Doreen, and will now be offered for sale at Grand Auctions in Folkestone, Kent on October 29.

Mrs Hall said: "I found the card when I was going through my husband’s papers after his death. It makes you stop and think that when you touch the postcard it could have been handled by Jack the Ripper 130 years ago. It’s a scary thought!"

"Nothing like this from the police files has ever come up for sale before with such convincing provenance, so we are dealing with a very rare artefact indeed involving someone who still casts a chilling shadow even after all these years," said Jonathan Riley of Grand Auctions.

"More than a century after the Whitechapel Murders, the killings have never been solved and the identity of Jack the Ripper remains a mystery. It continues to grip the public’s imagination and the story is never very far from the news headlines, with books, films and TV programmes all dedicated to the subject.

"So could this postcard with its 43 menacing words be from the Ripper? We will never know for sure…"