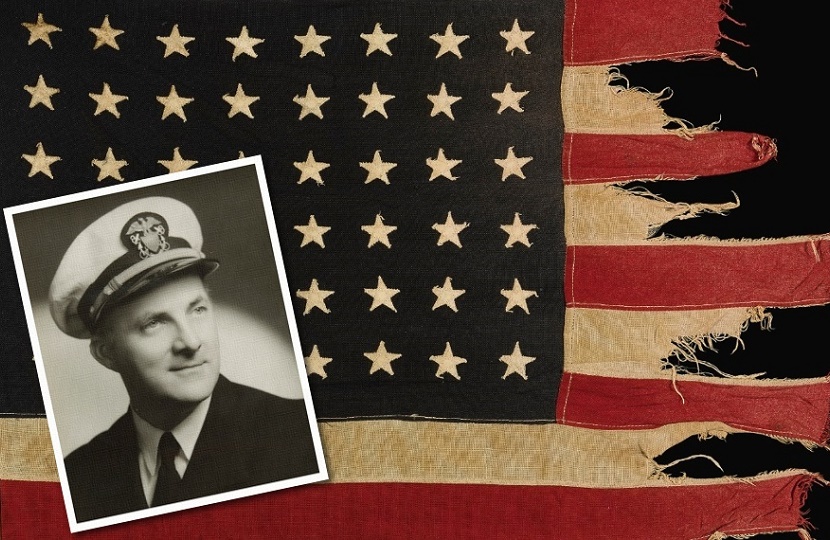 A U.S flag flown during the D-Day landings and rescued from a sinking battleship could fetch up to $500,000 when it goes up for auction at Sotheby’s this month.

The battle-scarred flag was flown aboard the USS Corry during the landings at Utah Beach on June 6, 1944, the largest seaborne invasion in history which paved the way for Allied victory in WWII.

It was rescued from the ship by Bronze-Star recipient Lt. Paul Garay, and has remained in the private collection of his family ever since.

A portion of the proceeds from the sale will benefit the Children of Fallen Patriots Foundation, a charity which provides college scholarships and educational counselling to children who have lost a parent in the line of duty.

The USS Corry was the lead destroyer of the Normandy Invasion, tasked with escorting ships and transports across the English Channel and laying down support fire for the first wave of front line troops.

However, as the landings were about to begin the plane supplying smoke cover was shot down, leaving the ship in full view of German gunners on the shore.

The Corry immediately came under a barrage of heavy artillery fire causing irreparable damage, and the order was quickly given to abandon ship.

Lt. Garay’s firsthand account of the attack details his brave actions as the Corry sank:

“I was on damage control…I went down to the magazine deck and stomped on the floor a couple times. There were four or five people down there…they undogged the hatch, lifted up the lid and got out just in time. Water was pouring in.

“As the ship was going down, with water coming up over the main deck, there was a lot to take care of…I happened to come through the wardroom and found the old steaming flag, the work flag. I grabbed it before I went overboard … A new flag had been put up; later on we could never figure out who had put up the new flag, but he was a brave man.”

The Corry eventually sank in just 30ft of water, leaving the ship’s mast and the newly-raised US flag visible above the surface.

Twenty-four crew members were killed and a further sixty were injured during the attack. Survivors were left in freezing waters for two hours under constant enemy fire, until they were rescued by other ships in the US fleet.

“Shells were landing all around us,” recalled Garay. “I managed to pull a couple of people out of the water. We were on a spar, some kind of an old raft or something. We all had life preservers on, but one guy had swallowed a lot of water. I tied him to the raft and we floated around there for about two and a half hours. We weren’t’ sure we’d get picked up. Finally, one of the other destroyers came around and got us.”

Lt. Garay was later awarded the Bronze Star Medal for his heroism that day, having saved the lives of four fellow crew members. But his bravery didn’t end there.

Having returned to the U.S, his sense of duty saw him immediately request a return to sea, and he was assigned to the USS Dashiell.

Several months later, whilst engaged in the Pacific Theatre, the destroyer came under siege from Japanese kamikaze bombers. Garay was wounded during the attack, and was honourably discharged from the US Navy.

He kept the flag from the USS Corry for the rest of his life, and in June 2002 it featured on the cover of National Geographic magazine, in an issue dedicated to the untold stories of D-Day which included Garay’s remarkable account.