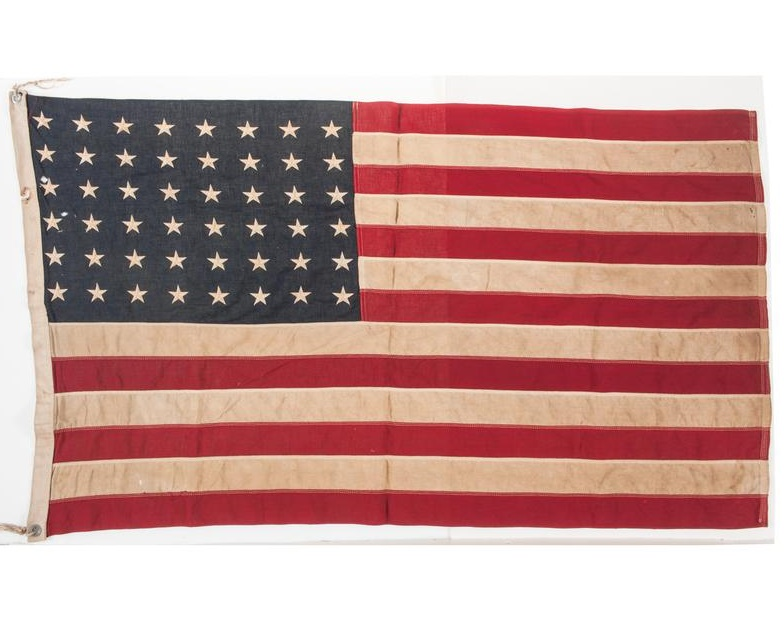 A U.S flag flown during the D-Day landings could bring up to $50,000 when it goes up for auction in Cincinnati this month.

The Stars and Stripes flag was flown aboard PT-520, a motor torpedo boat which engaged German ships during the Normandy Invasion in June 1944 – which marked the beginning of the end for the Nazis.

The flag was kept as a memento for decades by the boat’s Coxwain James Marcantonio, before being consigned to sale at Cowan’s Auctions.

During the invasion, PT-520 was part of the ‘Mason Line’ – a line of vessels extending into the English Channel, which served as a defensive net against attack by German ships.

Stationed just a few miles from the key landing zones of Omaha and Utah, PT-520 swept for mines and performed search and rescue operations.

“We were basically floating next to the USS Texas,” recalled Marcantonio, in a recent interview for War History online. “At that point, one of our missions was the retrieval of personnel from the water—sometimes Americans or French pilots, other times Germans.”

The crew of PT-520 were also present on June 8, 1944, two days after the invasion, when the USS Rich was sunk by German mines off the Normandy coast.

“We were nearby and rescued some of the survivors and retrieved some of the dead,” said Marcantonio. “It’s just one of those memories that I can’t erase and I wish those that lost their lives would have been able to live to celebrate the end of the war.”

On August 25, 1944, the boat was attacked by a German convoy escorted by minesweepers, and suffered a direct hit by a 40mm explosive shell.

The radio antenna was badly damaged, and the U.S flag was removed by Marcantonio, who kept it as a memento along with the boat’s log book.

Following the end of WWII, Marcantonia was discharged from the Navy in 1946 and returned home to Massachusetts, before heading off to university in Missouri where he would spend the rest of his life.

For years, the flag Marcantiano rescued from the PT-520 was displayed in his local shopping mall in Jefferson City, as a tribute to those who served during WWII.

It will now cross the block at Cowan’s Auctions on August 16, as an important artifact from one of the most significant military battles of the 20th century.