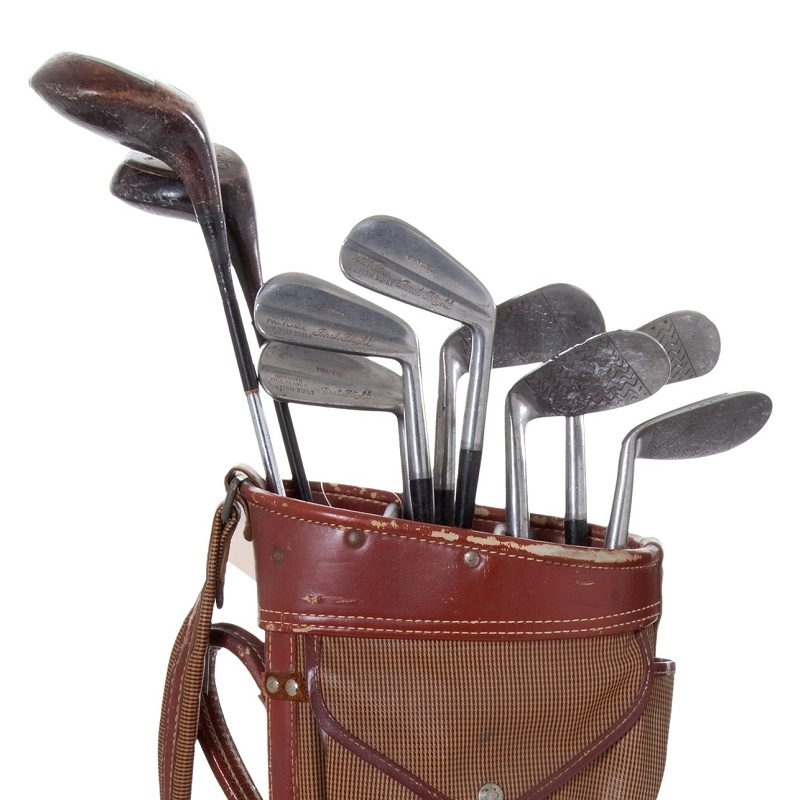 The first set of clubs ever owned by golfing legend Arnold Palmer are heading for sale in Dallas this month.
The 1940s-era clubs are expected to fetch more than $40,000 when they hit the block at Heritage Auctions on August 19-20.

Arnold Palmer rose to fame in the 1950s and became one of golf’s biggest stars, winning 62 PGA Tour titles and seven major titles during his six decade career.

He played a huge role in popularising and commercializing golf around the world, and to his army of fans he was known simply as "The King".

But Palmer’s remarkable story began as a boy back in the 1940s, following his father around as he maintained the golf course at the Latrobe Country Club in Pennsylvania.

Deacon Palmer started life as greenskeeper at the club, before rising to become the head professional, and he soon passed his passion for the game onto his son.

Young Arnold learned to play using this very set of clubs, including seven First Flight hickory-shaft irons and two Louisville woods, which he carried around courses as a schoolboy in Western Pennsylvania.

By the time he was a junior at Latrobe High School in 1946, Palmer had won both the WPIAL and Pennsylvania state golf championships.

The following year he became the first player in Pennsylvania history to retain both those titles, before heading off to Wake Forest College on a golf scholarship.

Palmer left his original clubs at home with his family, having upgraded to a new set, and there they remained until 1948, when Deacon Palmer was approached by a young man at the country club.

Carl Markwood had been a school friend of Arnold Palmer, and was seeking his own golf clubs. He didn’t have much money to spend, and wondered if Deacon knew where he could find an inexpensive set of used clubs.

"I think I may have a set that would suit you," said Deacon.

The clubs remained in Markwood’s possession for decades, having been authenticated by Palmer himself as the set he learned to play with.

Seventy years on, the clubs remain in the original tweed and leather Spalding bag Palmer tossed over his shoulder as a teenager.

According to Heritage Auctions, "match used relics of any format from this first golf icon of the television age are rarely seen and intensely coveted by Arnie’s Army, but here we find an exceedingly rare treasure without which all those to come would never have manifested. How often is one faced with the opportunity to revisit the first page of a great sporting biography?"

The auction will also offer the putter used by Palmer to win his first British Open championship in 1961, which comes with an estimate of more than $80,000.