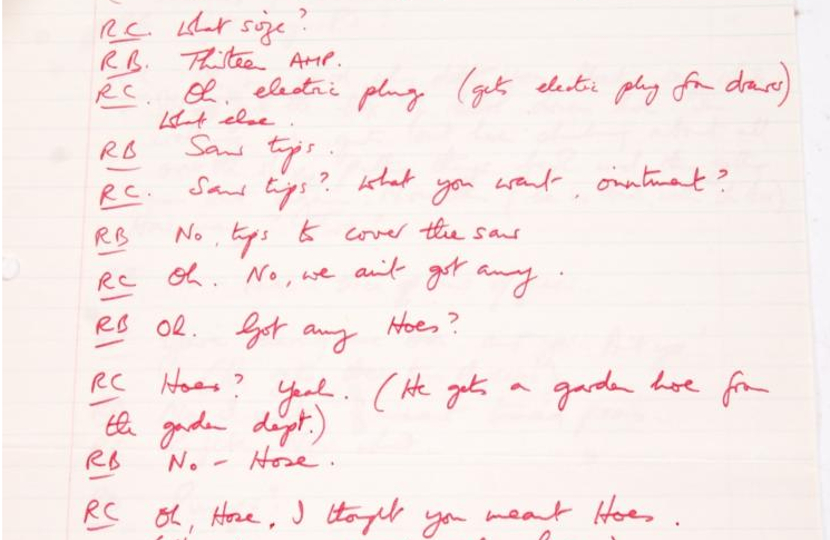 The script received £3,000 more in bids than in January, when it failed to sell (Image: East Bristol Auctions)

Featuring the red ink handwriting of Barker, who was using his pen name Gerald Wiley, the four sheets of paper hold some of the most cherished lines in British comedy.

The British public first saw the sketch in a September 1976 episode of The Two Ronnies. Barker’s original script emerged 30 years later, when it appeared on the Antiques Roadshow in 2006. The following year it sold for £48,000.

After a decade of dormancy it emerged for sale at Hansons Auctioneers in Derbyshire in January 2018. On that occasion it failed to sell as it received a high bid of only £25,000 – below the reserve.

This time around at East Bristol Auctions, the hammer price of £28,000 was enough to clinch the sale.

The price suggests two things. It’s testament to the sketch’s popularity with the British public; it’s routinely voted at or near the top of the country’s finest comedic moments. Yet at £20,000 below its high point from 2007, we may also be seeing a generational shift among collectors, with younger bidders lacking the affection for the comedic heroes of the 70s.

“It’s just four pages of writing but it’s something that’s made millions and millions of people laugh over a 40-year period.”

“Everybody loves it, everybody knows it and it’s part of the British conscious.”

It’s been a strong week for auctions of British comedic pieces. A pristine condition Emu puppet, once of Rod Hull and Emu, sold for £8,860 yesterday at Chippenham Auction Rooms.