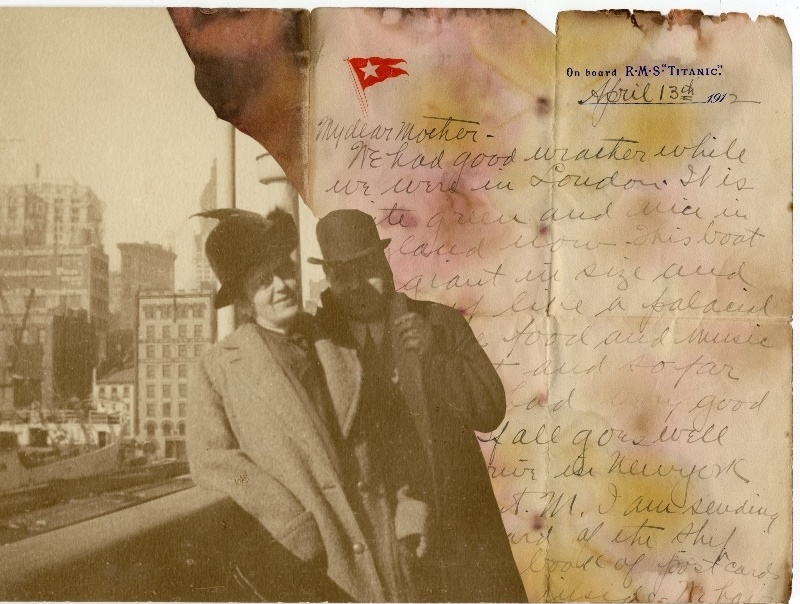 One of the last-known letters written aboard the Titanic before it sank is expected to sell for more than $100,000 at auction this week.
The four-page letter describes life on the luxury ocean liner, and was written on April 13th – the day before tragedy struck in the form of a deadly iceberg.

The letter was written by First Class passenger Alexander Oskar Holverson, who was travelling back to the U.S with his wife Mary Alice following a holiday in Buenos Ares.

Whilst Mary Alice Holverson survived the tragedy aboard lifeboat #8, her husband Oskar was not so lucky.

He was the 38th victim to be recovered from the water by the Mackay-Bennett, and his personal items were listed as including:

The folded letter was discovered inside his pocketbook, and features ink stains and damage where it was submerged in salt water.

Oskar had intended to post the letter to his mother when he reached New York. Instead, it was presented to his bereaved family amongst his personal effects.

The letter reads, in part:

"…This boat is giant in size and fitted up like a palatial hotel…If all goes well we will arrive in New York Wednesday A.M. I am sending you a postcard of the ship and also a book of postcards showing the inside…

"Mate had a letter from Mr. Berry at Buenos Aires which stated that she was getting on fine…Mr. and Mrs. John Jacob Astor is on this ship. He looks like any other human being even tho he has millions of money. They sit out on deck with the rest of us…"

The letter is the only known example written aboard the Titanic to mention John Jacob Astor, the wealthiest passenger aboard the ship and indeed one of the richest men in the world.

Astor was travelling with his pregnant wife Madeleine, who survived in lifeboat #4 along with her maid Rosalie Bidois, and her nurse Caroline Louise Endres.

Her husband went down with the ship, along with his personal valet Victor Robbins, and their bodies were also later recovered by the Mackay-Bennett.

"This letter is amongst the most iconic written onboard the Titanic that we have ever seen," said the auction house. "It is oversized, hand written on Titanic letterhead by a victim just a day before the ship hit the iceberg, mentions the food, the music and the elite on board, contains an ominous message with regards to the fate of the ship, was carried by its author into the Atlantic and, thence, onto the body recovery ship and shows evidence of its submersion in salt water.

"As such it ranks as one of the most important items of ephemera from Titanic that have ever been offered for auction, a truly world class example of Titanic memorabilia."