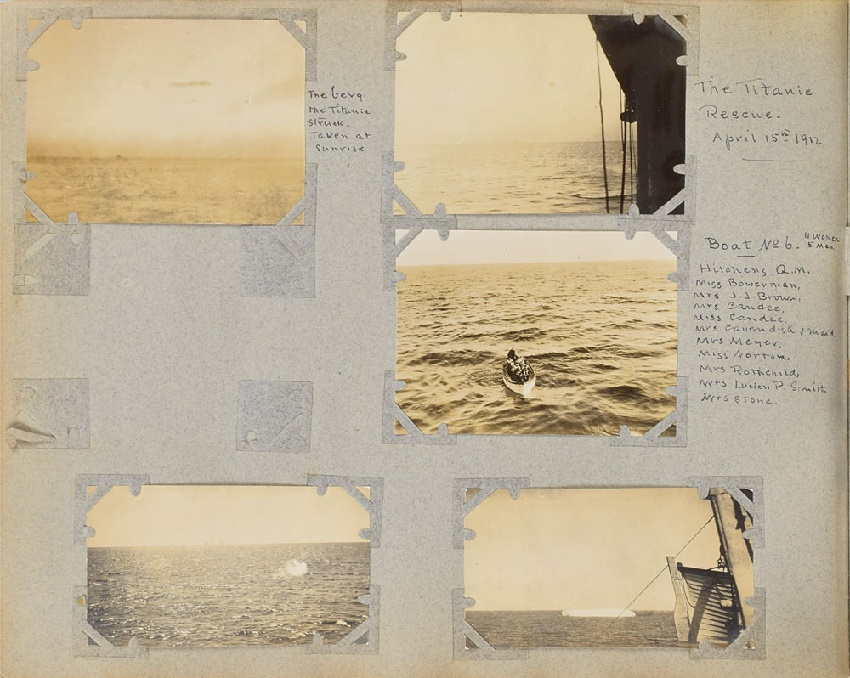 A rare photograph of the iceberg which sank the Titanic could sell for $50,000 when it goes up for sale at RR Auction next week.
The photograph is part of an album taken by Louis M. Ogden, a New York socialite travelling with his wife Augusta aboard the RMS Carpathia.

The Ogdens were in the middle of a globe-spanning expedition throughout 1911 and 1912, which saw them visit Algiers, the Sahara, Spain, Italy, Argentina, Gibraltar, Switzerland, Greece, and Austria.

The album includes more than 500 original photos from their trip – but 29 photos in particular are of true historical significance.

On the morning of April 15, the Carpathia was on its way from New York to Fiume, Austria-Hungary (now Rijeka, Croatia) when it received the Titanic’s distress call.

Two hours after the Titanic sank, the ship arrived on the scene in the middle of a dangerous ice field and rescued 705 survivors from the Titanic’s lifeboats.

Ogden captured the remarkable scenes with his camera, and assisted survivors as they were picked up from the freezing waters.

The photographs include images of Titanic emergency lifeboats 1, 6, and 14 as they approached the Carpathia, and shots of the numerous icebergs they encountered during the mission.

One particular photograph, of an iceberg with a double-peak is labelled in Ogden’s hand "The berg the Titanic struck, taken at sunrise."

In 2012 another photograph of the iceberg sold at RR Auction for $21,000, more than double its original estimate.

The photograph had been taken two days prior to the disaster by Captain WF Wood aboard the SS Etonian, as they sailed through the same region.

The distinctive elliptical shape was later matched to sketches and descriptions by eye witnesses aboard the Titanic, including the ship’s lookout that first spotted it on the horizon.

Ogden’s album also features two signed photographs of the Carpathia Captain Arthur Rostron, who was later awarded a silver cup and a gold medal, a US Congressional Gold Medal and a Knighthood by King George V for his efforts in the rescue operation.