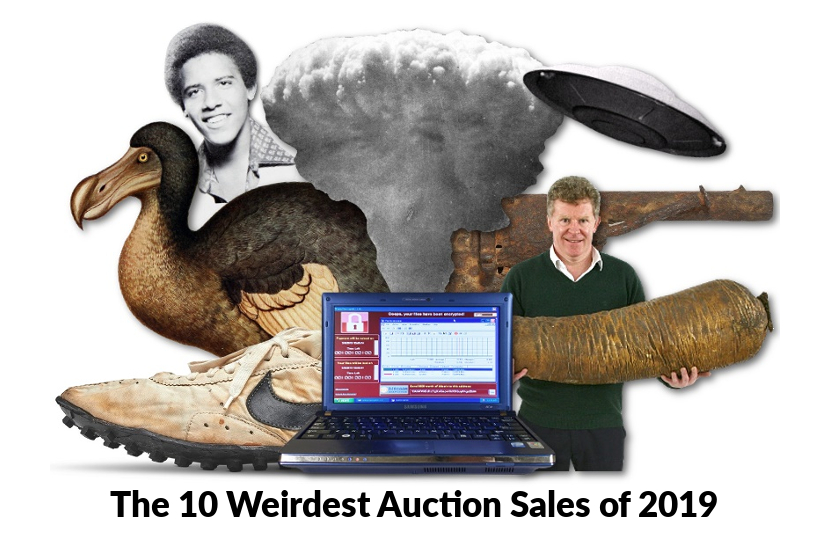 The world’s most famous UFO photograph

This photo was one of several taken in Switzerland in 1975 by Eduard Albert ‘Billy’ Meier, who claimed to have met aliens on several occasions and even started up his own UFO-based religion.

He then gave the photographs to Lt. Col. Wendelle Stevens, a former U.S. Air Force pilot who worked on Project Blue Book – the military’s official investigation into the existence of UFOs.

The image was later made famous by the hit TV show The X-Files, when it appeared as a poster in the office of FBI agent Fox Mulder along with the caption “I Want To Believe”.

Now regarded as one of the most iconic UFO photographs of all-time, the image doubled its estimate to sell for $16,250.

Not bad, considering Meier’s ex-wife later claimed he had faked all his photographs with home-made UFO models built from kitchen utensils.

In March 2019 U.K auction house Sworders hosted its annual ‘Out of the Ordinary’ sale, featuring oddities from around the world.

But even amongst a catalogue packed with the strange and unusual, one lot truly stood proudly above the rest – a taxidermy sperm whale’s penis.

And for us, it also produced one of the funniest auction catalogue photographs of 2019.

A lock of George Washington’s hair

But in this case, you could just as easily say “Hair today, still hair 220 years later!”

This lock of blonde hair came from the head of America’s first President George Washington, and was originally owned by the family of fellow Founding Father Alexander Hamilton.

Back in the 18th and 19th centuries, a lock of hair was considered a touching gift or keepsake, rather than a slightly creepy memento, and the hair of famous men such as Washington was much sought-after.

Although Washington died in 1799, several strands of his hair survive to this day in private collections, having passed down through families for generations.

They usually fetch a few thousand dollars at auction, but the personal connection to Alexander Hamilton – who served as Washington’s senior aid during the War of Independence – meant this particular lock sold at Leland’s Auctions in February 2019 for $35,000.

A miracle penny that stopped a WWI bullet

This 1889 copper penny made headlines around the world when it hit the block at Hanson’s Auctions in March 2019, thanks to its miraculous back-story.

Private John Trickett was one of three brothers who enlisted in the British Army during WWI, but sadly the only one who made it home again.

Horace and Billy Trickett were both killed in battle, and John would have met the same tragic fate, had it not been for the coin he kept in his top pocket for good luck.

The penny incredibly stopped a German bullet heading straight for his heart, which instead ricocheted up through his nose and went out through the back of his ear, leaving him deaf but still very much alive.

After he was honourably discharged from the army in September 1918, Trickett returned home to England, married his wife Clementine and raised eight children – all of whom owed their existence to a single coin.

With such significance, it was no surprise when one of John Trickett’s descendants paid £4,500 ($5,885) to keep the miracle coin in the family’s collection.

Although the last Dodo may have died 350 years ago, the legendary bird still managed to ruffle a few feathers in the auction room in May 2019.

The Dodo only lived on the island of Mauritius, until it was hunted to extinction by visiting sailors in the late 17th century, and there are no existing specimens other than skeletons found in the island’s swamps.

The only complete Dodo skeleton from a single specimen was discovered by the French hairdresser-turned naturalist Etienne Thirioux, and remains on display in the island’s Port Louis museum.

All the other examples are composites made from the bones of separate birds – although the skeleton sold at Christies came closer than most to being completely original.

It was the only 19th century skeleton left in private hands, and came with an impeccable history, having originally been owned by Paul Carié – the wealthy landowner who sponsored Etienne Thirioux’s Mauritius expeditions.

Usually when a basketball jerseys fetches a six-figure sums at auction, it’s been worn by one of the NBA’s biggest stars – rather than a laid back 18-year-old high school student in Hawaii.

Barry Obama may not have achieved a career in professional sports, but he did make up for it by becoming the leader of the free world instead.

Obama wore the jersey in 1978-79 during his senior year at Punahou High School, as a member of the Hawaii State Champion boy’s varsity basketball team.

Although he later dedicated his life to politics, Obama maintained his love of basketball, playing regular pick-up games at the White House against his staffers and even helping coach his daughter’s youth team.

The jersey was later inherited by Peter Noble, a member of the junior varsity team, who kept it in his own collection of school memorabilia – little knowing it would one day be a piece of political history.

And in August it sold at Heritage Auctions for $120,000, setting a record as the world’s most valuable sports jersey never worn by a professional athlete.

These two small metal plugs played a major role in one of modern history’s deadliest days – the atomic bombing of Hiroshima by the U.S on August 6, 1945.

The plugs originally belonged to Lieutenant Morris Jeppson (1922 – 2010), who flew aboard the Enola Gay as the mission’s Weapons Test Officer.

When the plane reached its target above Hiroshima it was Jeppson’s job to climb into the bomb bay, remove the green safety plugs and replace them with red plugs, arming the device.

He then witnessed the most significant and destructive moment of the 20th century, as the bomb fell on the city below resulting in the deaths of an estimated 145,000 people.

Jeppson kept the green plugs he removed, along with three unused red plugs, and later gave this set to his boss Dr. Edward B. Doll, head of Project Alberta which developed the bomb’s firing mechanism.

Having helped change the course of human history forever, the bomb plugs sold at Bonhams in December 2019 for $100,075.

In June a French auction house offered what it described as “the most famous weapon in the history of art” – the gun that killed Vincent van Gogh.

The painter spent the final weeks of his life in the French village of Auvers-sur-Oise, painting in the surrounding countryside and battling severe depression.

On July 27, 1890 Van Gogh borrowed a revolver from the owner of the inn where he was staying, and wandered off into a nearby cornfield.

He returned that night with a gunshot wound to his stomach and died 36 hours later, having uttered his final words “The sadness will last forever”.

Seventy five years later the rusted 19th century revolver was discovered buried in a nearby farmer’s field, and experts matched the calibre to the bullet removed by Van Gogh’s doctor.

The first pair of Nike sneakers

This pair of battered sneakers may look like something you find in the bottom of a closet – but they are in fact a piece of history.

In 1972, Nike co-founder Bill Bowerman was trying to invent a running shoe with the perfect grip for athletes in the U.S Olympic trials.

His “Eureka!” moment came when he spotted his wife making waffles for breakfast, and realized he could pour liquid rubber into the waffle iron to create an innovative sneaker sole.

He handmade 12 pairs of prototype shoes, which were the first to include his fledgling company’s new logo – the now-iconic Nike Swoosh – sewn on with fishing wire.

They proved a hit with athletes, and when he released them into stores two years later they caused a sensation which helped launch Nike as a major sportswear brand.

Today the company is valued at $16 billion – but the journey started with this rare and historic pair of prototype sneakers, which sold at Sotheby’s in July for a world record $437,500.

The world’s most dangerous laptop

Back in May the Chinese artist Guo O Dong presented his latest work, entitled ‘The Persistence of Chaos’.

The piece was in fact a laptop described as “the most dangerous in the world”, due to the fact it was infected with six deadly viruses (of the digital kind).

They included the MyDoom worm, designed for Russian email spammers, which caused up to $38 billion in damages; WannaCry, a piece of ransomware that cost the NHS in Britain $100 million; and the BlackEnergy virus, which caused a massive power blackout across Ukraine in 2015.

Together the six viruses had caused an estimated $95 BILLION in financial damages around the world.

It only came with one proviso for the new owner: DON’T plug it into the internet. 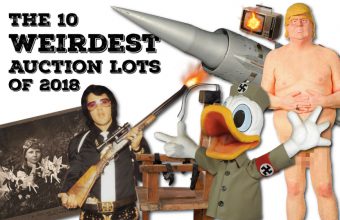 The Ten Weirdest Auctions Stories of 2018 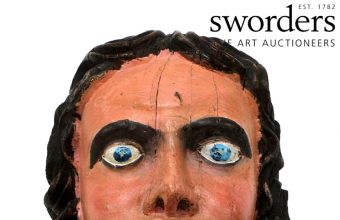 Sworder’s Out Of The Ordinary Auction: 10 Lots We’d Love To Own