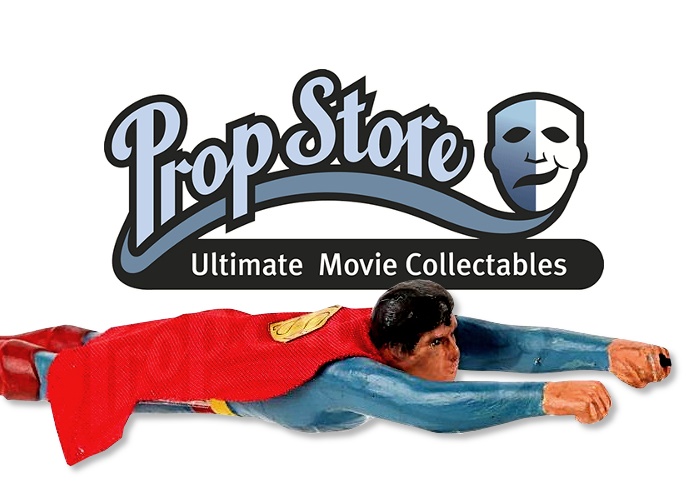 Our featured auction this week is the Prop Store’s Entertainment Memorabilia Live Auction, which takes place in London on September 30 – October 1.

The film’s famous tagline was “You’ll believe a man can fly”, and it used a combination of wirework, back projection and models to create the remarkable flying sequences, which later won the film a Special Achievement Academy Award for Visual Effects.

Hoffman wore the dress on screen during a scene in which his character Michael Dorsey takes part in a photo shoot, disguised as his female alter-ego Dorothy Michaels.

The image of Hoffman in the red dress was also used extensively in publicity for the film, including its poster, and the dress itself was later exhibited in a Saks Fifth Avenue window display for the film’s New York premiere.

The Bus Bomb from Speed

In the film, the bomb is hidden on a bus by a disgruntled former police officer Howard Payne (Dennis Hopper) and set to explode if the bus slows down below 50mph.

The film was a both a critical and box-office smash, which launched the career of Sandra Bullock and catapulted Keanu Reeves into the role of a Hollywood leading man.

Mulder and Scully’s FBI Badges from The X Files

This set of badges was used onscreen during the show’s third season, and were later sold to a private collector during a Fox Television charity auction.

Data’s Coat from The Goonies

In the film, Data conceals a number of imaginative home-made inventions inside his long coat, including Pinchers of Peril, Bully Blinders and a pop-out boxing glove.

The jacket is covered in patches from previous productions, including the 1985 TV mini-series Space and the 1965 war film None But the Brave.

An original production-used clapperboard from Steven Spielberg’s classic movie Jaws, in the style of a shark’s snapping teeth.

It’s believed that less than five of these clapperboards were custom-made for the production, in homage to film’s toothy protagonist.

The Batarang from the Batman TV show

The Batarang was one of Batman’s most commonly used gadgets throughout the show, and was employed as both a weapon and a grappling hook, with which the Dynamic Duo often used to climb vertical buildings.

The Holy Hand Grenade from Monty Python and the Holy Grail

In the film, the grenade is a sacred weapon used by King Arthur and his Knights to defeat the Killer Rabbit of Caerbannog – a harmless looking bunny with a taste for decapitation.

The prop was missing for 45 years, before being recently discovered in the family collection of the prop maker who made it back in 1975.

Jack Nicholson’s Axe from The Shining

Several axes were used during shooting of the film, but this example is the ‘hero’ axe which appears in several key moments, including the scene in which he smashes through a bedroom door and delivers his famously improvised line “Here’s Johnny!”

A Stormtrooper helmet from Star Wars

The helmet has been screen-matched to the early scene in which Princess Leia is captured by Imperial stormtroopers aboard her Rebel ship Tantive IV, and taken to Darth Vader.

Approximately 56 stormtrooper helmets were made for the production, and the majority were later repainted and repurposed for use in the 1980 sequel The Empire Strikes Back.

However, this incredibly rare helmet remains completely unrestored and appears exactly as it did onscreen in the original film.

In 1978 it was used during an unusual promotional event, which saw Star Wars cast and crew members take part in an equestrian event at an English country house, and was later gifted to the host of the occasion.