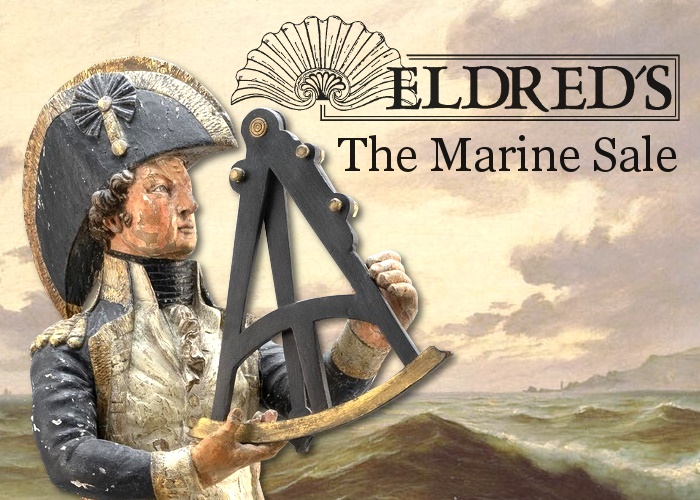 Our featured auction this week is the annual Marine Sale at Eldred’s Auctioneers in East Dennis, Massachusetts on July 25.

A mid-19th century pie crimper, carved from whale ivory, in the form of a Hippocampus – a fabled seahorse with its origins in ancient Phoenician, Etruscan, Pictish, Roman and Greek mythology.

A 19th century carved whaleship’s figurehead in the form of a female bust, with curled hair, long earrings, a cap-sleeved dress and a red swag draped across her bust.

Although the book is now considered a classic, Moby Dick was critically mauled upon its release in 1851 and just 3,000 copies of the American 1st edition were printed.

Of these, many remained unsold and were destroyed by a fire at the warehouse of publishers Harper & Brothers, leaving just a few in existence today.

Topsail fragment from the H.M.S. Victory

A swatch of cloth from the topsail of the H.M.S Victory, which served as Admiral Lord Nelson’s flagship during the battle of Trafalgar in 1805.

The historic fragment originates from the collection of Henry W. Carpenter, Captain of the US Navy flagship Olympia, who received it in 1902 whilst on a tour of the HMS Victory during a visit to England for the Coronation Naval Review.

A bone model of a British 1st rate ship, carved during the early 19th century by a French or British POW during the Napoleonic Wars.

A 19th century maritime diary entitled “Journal of A Voyage to the Pacific Ocean Kept By Joseph Tobin Jun on Board the Ship Rodman”.

This journal vividly describes life on a whaling ship, with entries dating from November 24, 1827 to June 7, 1830, and includes around 290 watercolour illustrations of whales, ships, islands, suns, moons, fish and birds.

Carved and painted wooden figure of The Little Navigator

An early 19th century wooden carving of The Little Navigator, made in England and later used as a shop sign in the German port city of Hamburg.

The Little Navigator is a traditional maritime figure depicting a man in naval uniform holding an octant, which was used to advertise ship’s chandlers and shops selling navigational equipment.

This carving is regarded as one of the finest examples to appear on the market in decades.

Burdett (1805 – 1833) is regarded as a pioneer of American scrimshaw, and his work has achieved record sums at auction.

This piece was engraved whilst he served aboard the whaling ship William Tell, circa 1830 – 1833, and was presented as a gift to the ship’s Captain Stephen Potter. 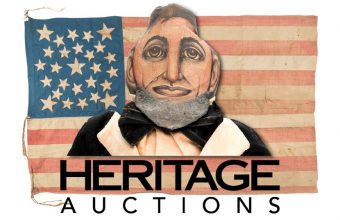