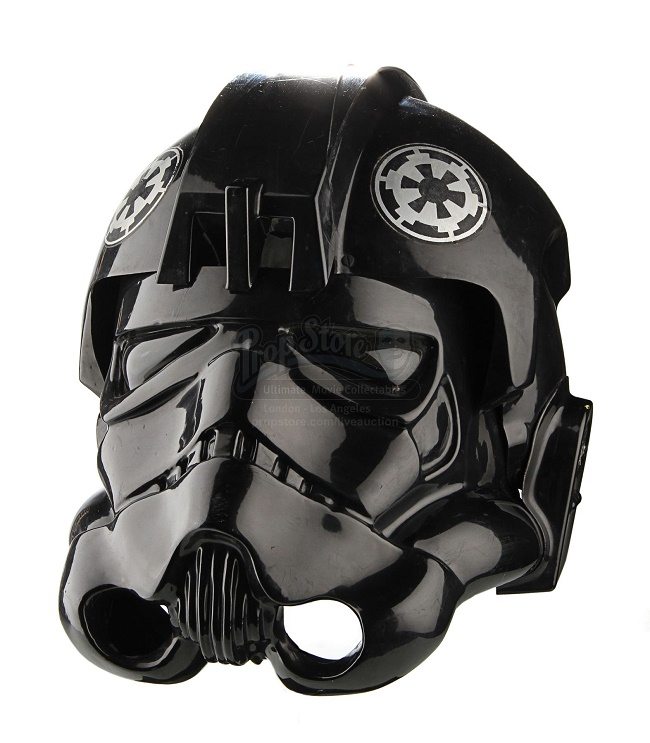 The helmet appeared in several sequences, including dog fights between Imperial TIE Fighters and Rebel X-Wings; the Millennium Falcon’s escape from the Death Star; and the final battle to destroy the Death Star. During production in 1976, fewer TIE Fighter helmets were produced that the standard white Imperial Stormtrooper helmets.

Designed by John Mollo, and manufactured from black vac-formed ABS plastic, just 14 helmets were produced for the production, and only 12 of those were used on-screen. Some were damaged, others were later reused during Return of the Jedi, and a couple were repurposed as AT-AT crew helmets in The Empire Strikes Back, leaving just a handful for collectors today.

Next was an X-Wing filming miniature used in The Empire Strikes Back, during the scene in which the rebels evacuate their base on Hoth.

Having built and destroyed countless X-Wing miniatures during the production of the first film, the production crew came up with a novel idea to same time and money the second time around.

They simply went out and purchased X-Wing model kits which were by then available in toy stores, and had the ILM team carefully construct and paint them up before filming them on the motion control stage.

Following production, the model was presented as a gift to Special Visual-Effects supervisor Brian Johnson, and sold at the Prop Store sale for £108,000 ($140,000).

And finally, the sale included an original camera used to create the groundbreaking effects in all three films of the original Star wars trilogy.

The Motion Control ‘Rama’ Camera was used by Industrial Light and Magic to film sequences with animated miniatures, along with the sequence in which the Millennium Falcon makes the jump to light speed for the first time.