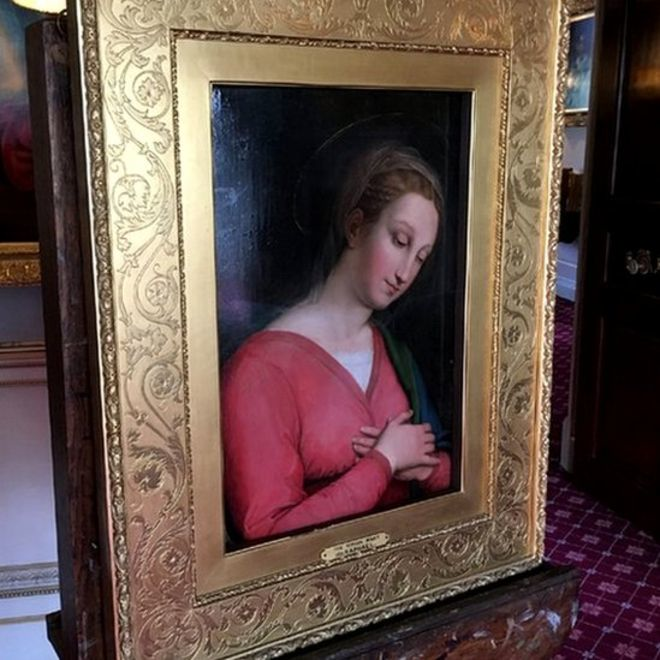 A pair of BBC art experts have uncovered a rare 16th century painting which could be worth around £20 million.
The painting was discovered during a visit to Haddo House, an 18th century house in Aberdeenshire now owned by the National Trust for Scotland.

The work in question was a portrait of the Madonna dated circa 1505-1510, which had been attributed as being ‘after Raphael’ – a term used to describe a work by an unknown artist in the style of another.

It had originally been acquired by George Hamilton-Gordon, the 4th Earl of Aberdeen, who formerly owned the house and also served as British Prime Minister between 1852 and 1855.

He had initially believed the painting to be a genuine Raphael work, but it was later attributed to Innocenzo da Imola, a lesser Italian artist, and in 1899 records show it had been written off as a copy valued at just £20 (around £2,000 today).

However, after being spotted on the dining room wall by BBC art experts Dr Bendor Grosvenor and Jacky Klein, the painting was professionally cleaned and conserved for the first time – and a masterpiece was uncovered.

Having been carefully examined as part of the BBC4 show Britain’s Lost Masterpieces, experts now believe the painting to be a genuine work by Raphael, one of the greatest of the renaissance artists, with a possible value of £20 million ($25.49 million).

"Finding a possible Raphael is about as exciting as it gets," said Dr Grosvenor. "This is a beautiful picture that deserves to be seen by as many people as possible. I hope ‘the Haddo Madonna’, which would be Scotland’s only publicly owned Raphael, brings many people to this part of Aberdeenshire."

The experts also uncovered another important work hanging in the dining room of Haddo House -&nbsp; a previously unknown early painting by the French landscape artist Claude Lorrain, whose work inspired the likes of Turner and Constable.

"We always knew that the collection at Haddo was very special, and the discovery of these wonderful pieces confirms its importance in the Scottish art world," said Jennifer Melville, head of collections, archives and libraries at the National Trust for Scotland.

"It is rare for visitors to see works of this quality outwith a gallery, so it is a real treat to come to Haddo House and enjoy them in this wonderful setting.

"This is particularly exciting for the piece which looks likely to be by Raphael. There are not many places where you can experience the work of one of the Renaissance’s giants in a dining room. It is this intimacy which makes exploring our collections quite so special."

The story of the remarkable discovery airs in the UK on BBC 4 on Wednesday October 5 at 9pm.