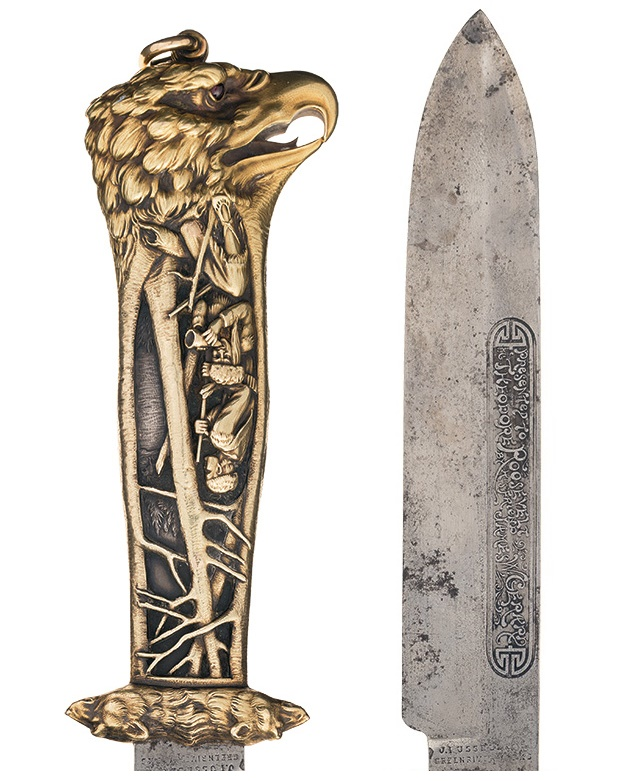 An elaborate gold hunting knife owned by U.S President Theodore Roosevelt has smashed its estimate at auction, to become the most expensive American knife ever sold.
The knife was described as "a nearly priceless piece of American history", and surpassed its estimate of $150,000 – $300,000 to sell for a new record price of $414,000.

When Roosevelt left the Oval Office in 1909, he set off on an African expedition sponsored by the Smithsonian Institution, during which his team captured or killed more than 11,000 specimens.

Prior to his departure, in return for his years of service, Roosevelt was presented with a number of gifts from well wishers around the world, including custom-made rifles, knives and lucky charms.

One of those gifts was this elaborately crafted hunting knife, featuring an eagle’s head carved from solid gold, which was presented to him by his close friend, New York Supreme Court Justice James W. Gerard.

Gerard sent U.S. Marshal Thomas D. McCarthy to present Roosevelt with the knife, stating "be sure to get a coin, a penny from the President when you give him the knife…remember the old superstition that a gift of that sort cuts friendship unless a small payment is made for it."

According to McCarthy, Roosevelt didn’t have a penny to give in return, so the Marshall lent him one. The President gave McCarthy an autographed photograph, a book for his father, and then presented him back the coin in exchange for the knife. "I always have been proud of the fact that a President of the United States owed me a penny," he said later.

The presentation of the knife made news across the U.S, and it remained in the possession of the Roosevelt family for 107 years, passing down through various generations.

In 1976 the daughter of Roosevelt’s second wife Edith, Ethel Roosevelt Derby, surprised security at JFK airport in New York when the knife set of the security alarms in her handbag!

She was transporting the knife to Seattle as a wedding gift for her granddaughter and, having been allowed to travel with it, the knife was used to cut the couple’s wedding cake.

The sale at Rock Island Auctions marked the first time the knife had ever been offered for sale.

Another of the gifts Roosevelt was presented before the expedition, a custom-made, gold-inlaid, Presidential Fox shotgun, previously sold in October 2010 for $862,500, setting a world-record price for any rifle sold at auction.