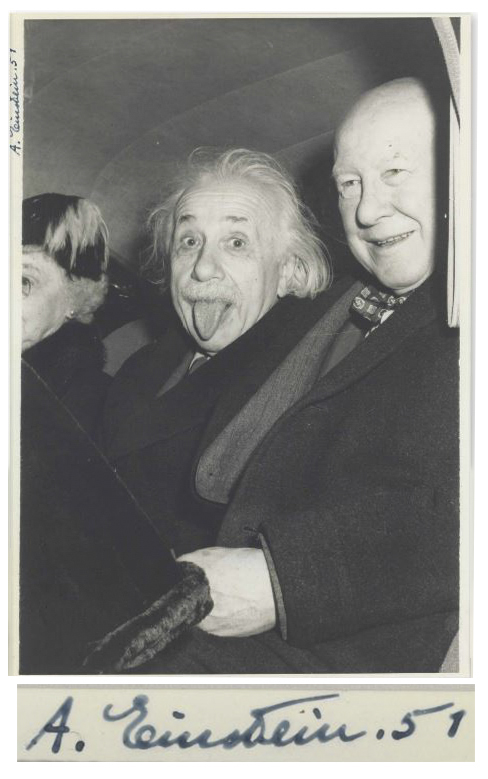 A highly rare autographed copy of Albert Einstein’s most famous photograph could sell for more than $100,000 later this month.
The photo of Einstein playfully poking out his tongue is one of the 20th century’s most iconic images, and has been reproduced on merchandise millions of times.

Historic memorabilia auction house Nate D. Sanders is now offering a highly rare copy, signed and dated by Einstein himself, as part of their July 2017 sale.

The photograph was taken on March 14, 1951, as the physicist was returning home from his 72nd birthday party at Princeton University.

Einstein had spent the evening with friends and colleagues, along with a flock of press photographers who continually asked the shy physicist to smile for the camera.

Having grown tired of providing fake grins all night, he accepted the offer of a ride home with Dr. Frank Aydelotte, the former head of the Institute for Advanced Study.

But as they were leaving, the car was surrounded immediately by the press, including Arthur Sasse, a United Press International photographer, who approached Einstein and once again asked him for a smile.

Instead Einstein stuck out his tongue, just for a second, before quickly turning away. It was a brief, spontaneous moment, and only Sasse was lucky enough to capture it with his camera.

His editors were initially unsure whether to publish it, feeling it may seem disrespectful, but with his wild hair and leather jackets, Einstein had never been the most conventional of scientific figures.

The public loved the photograph, but Einstein loved it even more. He requested nine cropped copies from UPI, and used the image on Christmas cards to his friends.

However, it was later revealed that the moment had more meaning than most people realized.

Einstein signed a copy of the photo for news anchor Howard K. Smith, and inscribed it in German:

"This gesture you will like, because it is aimed at all of humanity. A civilian can afford to do what no diplomat would dare."

In the midst of the notorious McCarthy ‘witch hunts’, during which many of Einstein’s friends and colleagues were being asked to expose each other as Communist sympathizers, he made his own small political gesture.

Not only was he poking his tongue out at reporters – he was poking it out at the entire system. 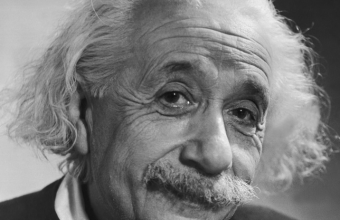