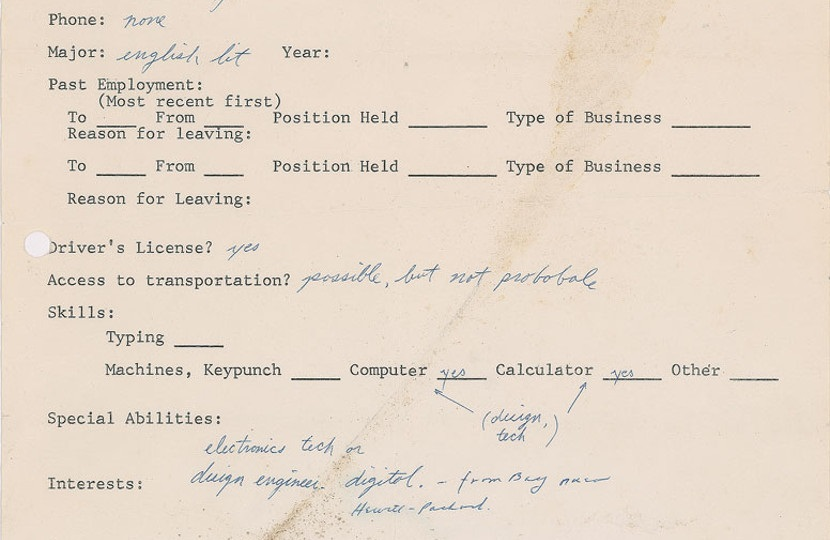 A job application filled out by Steve Jobs in 1973, when he was 18, has set a new world record for the former Apple CEO’s signature at auction.

The huge price reflects the rarity of Jobs’ autograph and this example’s early date. Jobs had dropped out of Reed College the previous year as his parents were struggling with the course fees. It’s unclear what role or company Jobs was applying for here, but the date places it to around the time he started working at Atari.

The following year he’d go travelling around India, before returning to the US. In 1975, Steve Wozniak created the first Apple-1.

Steve Jobs hated signing autographs. The consignor of this example explained just how hard he had to hustle for it in a letter of provenance. “I rolled down my window and called up his name,” he remembers.

“He asked me whether he knew me. I told him I certainly knew who he was and immediately asked him if he would be kind enough to sign my Mac OS X Administration technical manual.

“He refused and said ‘I feel weird doing that.’ I refused to back down. After a bit of cajoling on my part, he finally told me to hand over the manual and pen. He said ‘give me those’ and he autographed my manual.”

Other highlights of the sale included a 1976 tour poster signed by reggae legend Bob Marley.

The piece, which features a long inscription from Marley praising Ethiopian emperor and Rastafarian figurehead Haile Selassie I, achieved $31,000.

It’s a particularly fine example of Marley’s signature, which appears alongside others from members of the Wailers and their road crew.