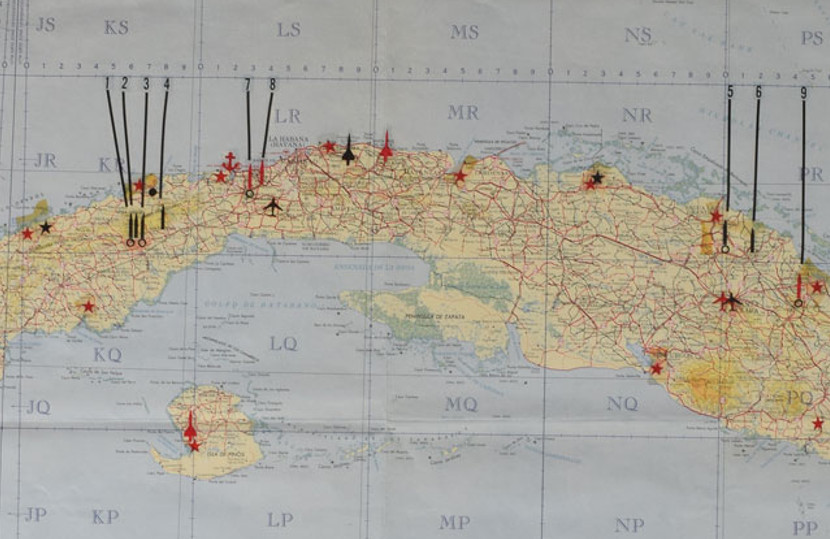 President John F Kennedy used this map during the Cuban Missile Crisis in October 1962. It’s now set to star in RR Auction’s April 11 sale.
The map shows the island of Cuba, along with nine targets marked by stickers. Each represents a nuclear site or other area of strategic interest. The intelligence was gathered by top secret U-2 spy planes and shows the lie of the land on October 27.

This was the most frightening day of the two week ordeal. Proceedings were kicked into a white-knuckle high gear when the Soviets shot a US spy plane down over Cuba. JFK had to make a choice: retaliate or remain calm. He chose the latter.

However, things got even hairier later on that day, when a US ship dropped depth charges on a Soviet nuclear armed submarine. On that occasion nuclear war was prevented by one officer, Vasili Arkhipov, who voted not to fire.

As the night dragged on, the Americans and Soviets finally managed to hammer out a deal.

This map was gifted to the consignor by then defence secretary Robert McNamara.

It’s accompanied by a letter of provenance that reads: "This ‘victory map’ was given to me about twenty years ago by Robert McNamara, the secretary of defense during the Cuban Missile Crisis of October 1962.

“During a meeting at his office, McNamara described for me the pressure President John Kennedy was under from the Joint Chiefs of Staff to order an attack on Soviet targets in Cuba. McNamara said the president pored over this map before deciding to delay the attack.”

The crisis is considered by many to be Kennedy’s finest hour. That this map was so central to the negotiations is likely to push its price far higher than the $20,000 estimate.