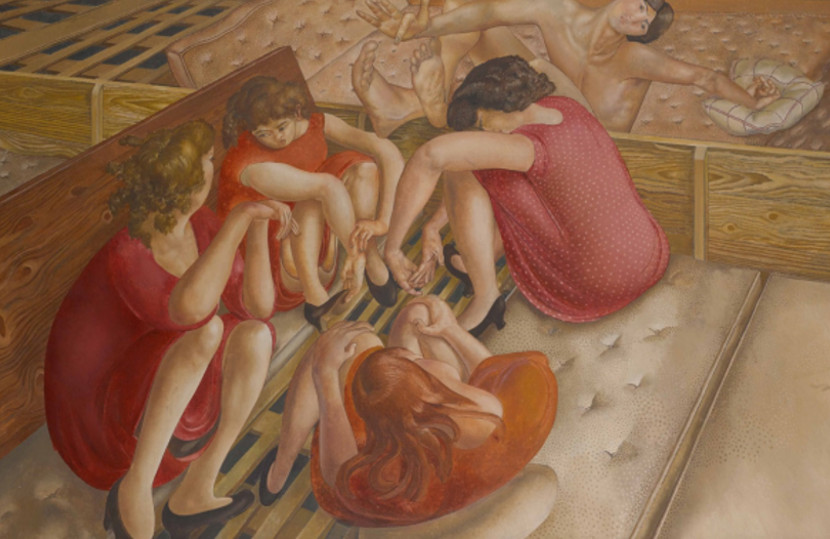 Sir Stanley Spencer’s Christ Preaching at the Cookham Regatta: Punts by the River (1958) is set to make up to £5m ($6.8m).
The important canvas, unseen in public for almost 60 years, will lead the Modern & Post-War British Art sale in London on June 12.

Spencer was born in the small English village of Cookham, Berkshire in 1891. A deeply religious man with a strange and disquieting take on christianity, he presented his home as a kind of heaven on Earth peopled with his friends and neighbours and infused with his psychosexual broodings.

Christ Preaching at the Cookham Regatta was his final series. Punts by the River, the present lot was one of six paintings intended to hang alongside a monumental 17 foot long centrepiece. Sadly Spencer died before he could finish his work.

In this work a naked man (likely Spencer) tries to clamber aboard a punt. These boats were not cheap to rent at the annual Cookham Regatta. Growing up in a lower middle class family, Spencer was never able to join the bacchanalia on the Thames. He later described the spectacle as being "like an unattainable Eden".

Frances Christie, head of modern &amp; post-war British art at Sotheby’s, said: “The star of this season’s Modern British art offering is a monumental painting by Stanley Spencer from his great series in which he imagined Christ coming to preach at Cookham Regatta.

“Inspired by the great painters of the early Italian Renaissance, Spencer’s symbolic realism is played out on a majestic scale that is nonetheless familiar as quintessentially British everyday life. We are thrilled to be presenting this work at auction for the first time, and to put it on public view for the first time since 1961.”