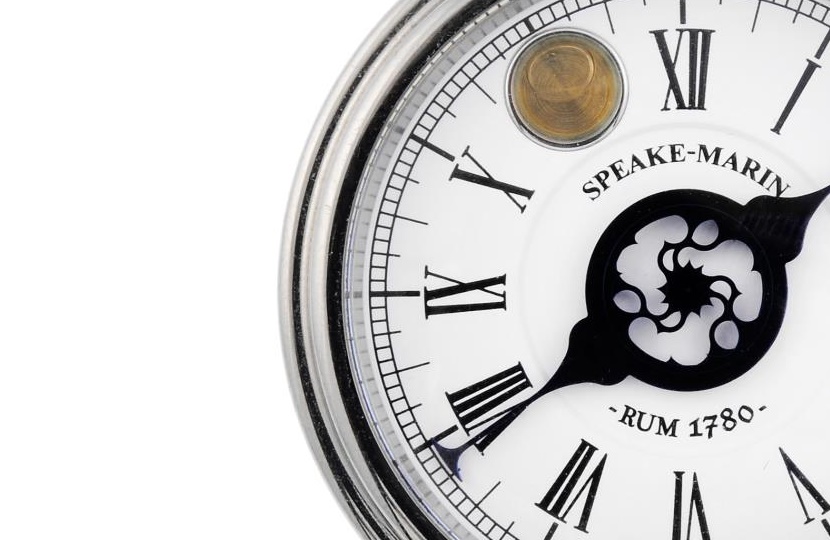 The watch contains a single drop of rum dating back to the 1780s (Image: Fellows Auctioneers)

A rare watch containing a drop of the world’s oldest rum surprised auctioneers this week, when it sold for three times its estimate in the U.K.

The Speake-Marin limited-edition timepiece featured a sample of rum produced in 1780, making it the oldest in existence as certified by the Guinness Book of Records.

But the sale at Fellows Auctioneers on July 31 attracted fierce bidding from two rival phone bidders, who pushed it up to a final price of £14,674 ($19,195) including buyer’s premium.

“We are so pleased to have sold such a unique piece,” said Michael Jagiela, Senior Watch Specialist at Fellows.

“Speake-Marin are known for being an innovative watchmaker. It is unusual to see such an outstanding timepiece come up for auction, and it was a privilege to be able to sell it.”

The watch was a collaboration between Speake-Marin and Wealth Solutions, who joined forces to create The Rum Project – a series of luxury wristwatches based on the history of the British Royal Navy.

Until 1970, sailors in the British Navy traditionally received a regular rum ration, served from an ornate barrel decorated with the phrase “The Queen, God Bless Her”.

Each day at 11 o’clock, the ship’s bosun would cry “Up spirits!”, to which the sailors would reply “Stand fast the Holy Ghost” as they lined up to receive their daily shot.

To commemorate this naval tradition, the watch was crafted to include a single drop of the rum marking the 11th hour, along with the phrase “Stand Fast The Holy Ghost” engraved on the case back.

The rum used to make the watches was originally discovered back in 2011 at Harewood House, a large country estate built in the mid-18th century for the wealthy plantation owner Edwin Lascelles.

It had been produced in Barbados around 1780 by slaves at one of the Lascelles family’s plantations, and then shipped back to England in barrels before being bottled up and stored in the cellar of the house.

Remarkably, 59 bottles then remained untouched on the same shelf for the next 235 years, before they were uncovered beneath thick layers of dust and mould during a recent inventory of the wine cellar.

The proceeds of that sale were donated to the Geraldine Connor Foundation, a charity which supports Caribbean communities connecting young people with the arts.

Some of the rum was acquired by Wealth Solutions, who then set about creating The Rum Project with Speake-Marin in 2016.

In total, fifty-nine watches have been produced in rose gold and titanium – one for each bottle discovered at Harewood House.