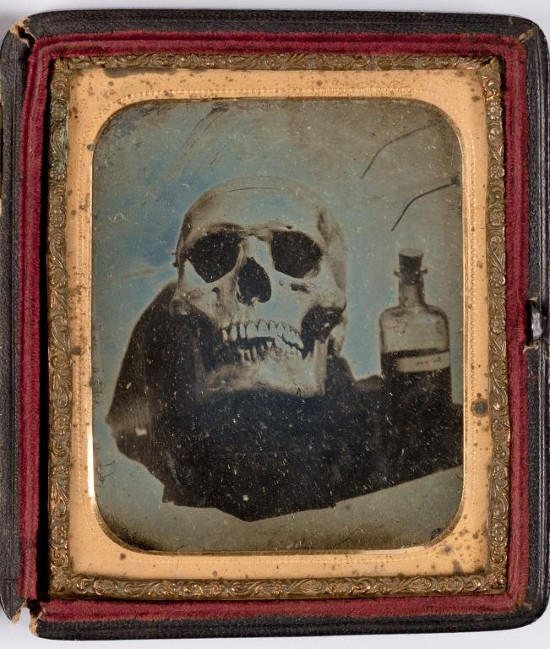 A very rare daguerreotype displaying a skull and a bottle of poison is offered at John McInnis Auctioneers.
The lot is valued at $2,000-3,000 ahead of an April 3 sale in Amesbury, Massachusetts that will feature a selection of early photographic items. &nbsp;

While the exact date and origin of the piece is unknown, it’s believed to date to the early years of the process.

Louis Daguerre, a French artist, invented the technique in the late 1830s – following years of experimentation. He had initially teamed up with Niecephore Niepce, the inventor of the heliotrope, to work on the project.

The process involves exposing a sheet of silver plated copper to light and treating it with a variety of chemicals.

Daguerreotypes were expensive to make and were only produced for a brief period between 1839 and the end of the 1850s.

Another example taken by an American photographer in either Pennsylvania or Montreal is valued at $2,000-4,000.

The image shows a Manse – the name for the home of a Presbyterian minister.

A remarkable Aine Paris photographer’s colouring kit from the 1880s is offered with an estimate of $500-700.

The lot features an almost complete set of paints housed in an elaborate telescoping box.

Colour photography would not become fully established until the mid-20th century. Tinting photographs was thus a popular way of approximating colour.