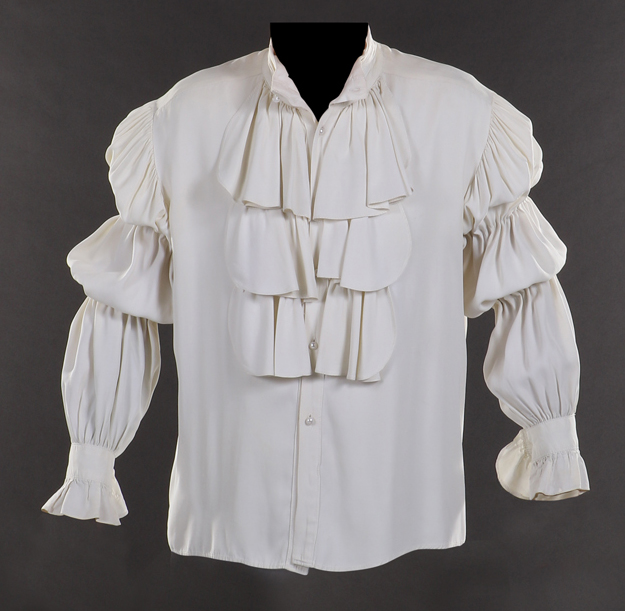 The iconic ‘puffy shirt’ worn by Jerry Seinfeld in his hit U.S sitcom has sold at auction for an amazing $45,000.
The shirt was amongst the top lots in day two of Profiles in History’s entertainment memorabilia sale, and was originally estimated to sell for $10,000 – $15,000.

It featured in the famous season five episode in which the comedian accidentally agrees to wear the shirt during an appearance on The Today Show.

When Jerry announces he’s appearing on the show to promote a charity benefit, Kramer’s "low talking" girlfriend asks if he’ll wear a shirt from her new clothing line.

Unable to understand a word she says, Jerry simply nods – and then finds himself stuck wearing the ridiculous shirt on live television.

The episode, which originally aired in September 1993, features some of the show’s most memorable quotes:

Kramer: "This pirate trend that she’s come up with, Jerry, this is gonna be the new look for the ’90s. You’re gonna be the first pirate!"

Elaine: "You’re supposed to be a compassionate person! That cares about poor people! You look like you’re gonna swing in on a chandelier!"

Series co-creator Larry David later claimed The Puffy Shirt was one of his favourite episodes of the show, which is regarded as one of the greatest and most successful sitcoms of all-time.

In 2004, another of the puffy shirts used during filming was donated to the Smithsonian museum by Jerry Seinfeld himself, and became a highly popular exhibit with fans of the show.

"The museum collected artifacts from the show Seinfeld because the show was such a defining moment in American TV comedy and American culture," said curator Dwight Blocker Bowers.

"I remember telling Jerry Seinfeld that the essence of the show was him and his humor. Short of taking him to a taxidermist and having him conserved for the collection, the puffy shirt, of the precious little material culture that remained from the show, gave a sense of the slightly absurd brand of comedy that was featured on the show."