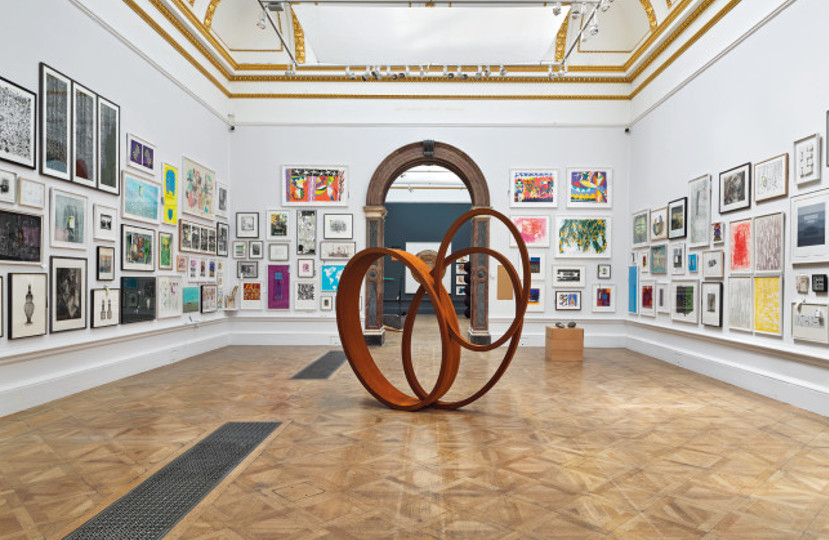 The annual open show celebrates artists of all stripes, from venerable members of the Academy to hobbyists quietly working away in their living rooms. Anyone can submit up to two pieces for selection at the cost of just £25 ($33) each.

Each of the 80 living members of the Royal Academy are eligible to show six works.

Among the largest is a monumental courtyard sculpture by Anish Kapoor, titled Symphony for a Beloved Daughter.

This vast circular disc towers over a pile of rubble and will greet visitors as they enter.

There are also two new works from painter David Hockney that explore perspective.

Hockney refers to them as photographic paintings. One work, titled “Seven trollies, six and a half stools, six portraits, eleven paintings, and two curtains” shows a near life size view of the artist’s studio.

The other, “Inside it opens up as well”, shows three figures seated in a gallery. Each of these murals is created through a combination of photography and digital painting. This results in several vanishing points, creating a 3-D effect.

Grayson Perry is known for his focus on democratising art and the exhibition bears his populist touch. The newly opened Ronald and Rita McAulay Gallery is filled with artwork that the committee found funny (including pieces by the anarchic illustrator David Shrigley). One gallery is painted bright yellow.

As Perry explained to the Guardian newspaper: “Colour and fun, colour and fun. I’m trying to get everything to zing off each other.

“I want this room to be a celebration of the rough and tumble that is the summer show. The RAs have got to fight it out with Joe Bloggs, and that’s what’s great about it. Sometimes Joe Bloggs comes off better. ”

The Summer Exhibition is on display at the Royal Academy from June 12 to August 19.