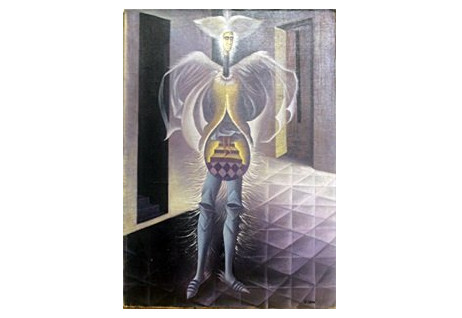 El Embarazo, a painting by Remedios Varo, is offered with an estimate of $900,000-950,000 in a sale at Best Auction For You in Des Moines, Iowa on February 18.
The painting is a fine example of her eerie and unsettling work and dates to 1959.

Varo was a Mexican-Spanish artist associated with the surrealists, although as a woman she was heavily marginalised and never received the acclaim granted her peers.

She lived much of her life in Spain, but as a republican was forced to leave for Mexico City in 1941.

There she joined a circle of female artists who had fled there to escape the war, including Leonora Carrington and Kati Horna.

Mexican painter and fellow surrealist Frida Kahlo was not among them – she used to refer to them as "those European bitches".

Her record is $3.3m, set for her best known work Vegetarian Vampires at Sotheby’s last year.

A work by another South American artist, Jose Campeche, is expected to bring an identical valuation of $900,000-950,000.

Campeche was born in Puerto Rico, where he also trained as a painter.

He was taught by Luis Paret y Alcazar a Spanish court painter exiled from Madrid following a mysterious scandal.

Campeche worked in a rococo style and is among the most celebrated of the baroque era South American painters.