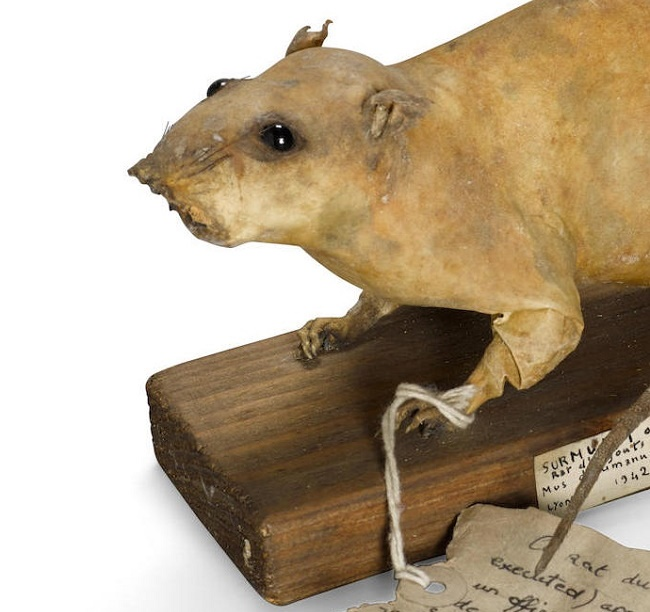 An auction at Bonhams next month will include a particularly strange piece of WWII memorabilia – a ‘rat bomb’ used by secret agents in Occupied France.
The preserved bomb is expected to fetch $1,500 – $2,000 when it goes up for sale on December 6, as part of Bonhams’ Voices of the 20th Century sale in New York.

The idea of the rat bomb was originally conceived in 1941 by a British military organization known as the Special Operations Executive (SOE).

The SOE was established in 1940 to conduct espionage, sabotage and reconnaissance in occupied Europe, and offer support to local movements such as the French Resistance.

The idea was simple, yet effective: the dead rats would be stuffed with plastic explosives, and hidden in the boiler rooms of Nazi-occupied government buildings.

It was assumed that any caretaker finding a dead rat would simply shovel it into the furnace, causing an explosion and destroying the building’s heating system.

Posing as the London University science department, the SOE initially ordered 100 rats for ‘dissection’, then packed them with explosives and sent them off to France.

However, this first batch was intercepted by the German authorities, and led to a costly and time-consuming search for suspicious-looking rats in government buildings.

The plan was soon cancelled, but the SOE later concluded "The trouble caused to them was a much greater success to us than if the rats had actually been used."

Many of the unexploded rat bombs were later mounted and used as training exhibits in German military schools.

This particular example bears a tag suggesting it was used for training at a French police station, having been found in the possession of British agent Jack Dickens in 1942.

‘Jack Dickens’ was in fact a pseudonym for Maurice Ledain, a French SOE officer who was dropped behind enemy lines several times during the war.

Having escaped Nazi-occupied France in 1940, Ledain came to Britain and joined the Allied Commando 10 unit.

He later served as a member of the Free French Air Force, an agent of the BCRA (the French Intelligence Service), and was awarded the Legion D’Honneur for his actions.