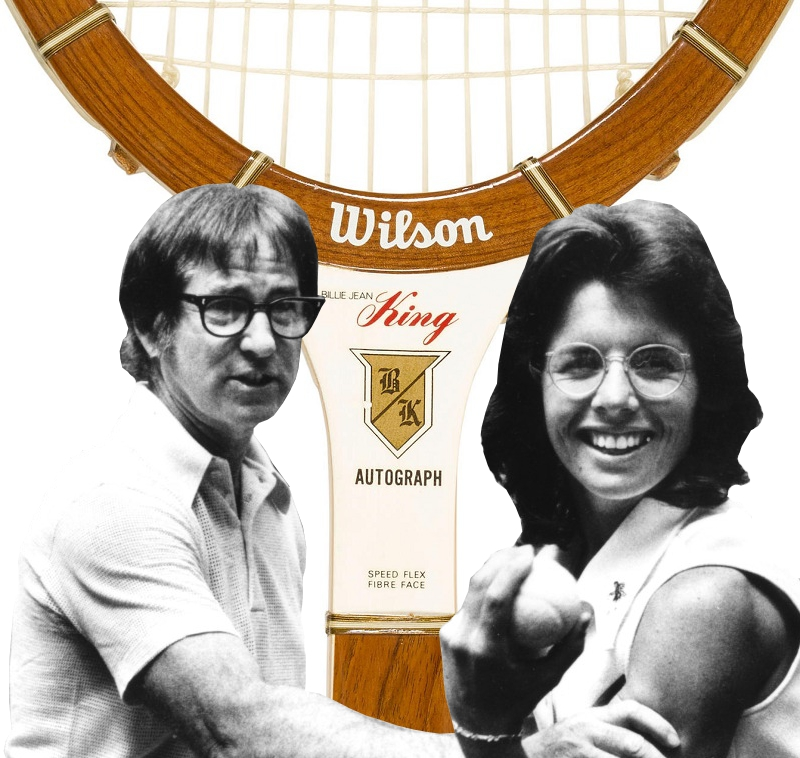 The tennis racquet used by Billie Jean King in the famous ‘Battle of the Sexes’ match is going up for auction at Bonhams.
The ‘battle’ saw Wimbledon champion King play former Wimbledon and U.S. champion Bobby Riggs at the Houston Astrodome in 1973 for a prize of $100,000.

The Battle of the Sexes match was the brainchild of Riggs, a showman of the highest order, a seasoned tennis hustler and professional gambler.

According to his autobiography, he had made the modern-day equivalent of around $1.8 million by illegally betting on himself during the 1939 Wimbledon championship.

Riggs saw the match as an opportunity to raise the profile of tennis and – more importantly – make himself a stack of cash in the process.

He played the role of the classic male chauvinist, and publically claimed that, even at the age of 55, he could comfortably beat the highest-ranked players in the women’s game.

Set against the social backdrop of the growing Women’s Liberation movement, the event caught the public imagination across the U.S.

Riggs was initially proved correct in May 1973, when he beat the world #1 Margaret Court, and he subsequently taunted female players from the covers of Sports Illustrated and Time Magazine.

Billie Jean King accepted his challenge, sensing that a win would strike a vital blow for women’s equality both within the sport and throughout society.

"I thought it would set us back 50 years if I didn’t win that match," she admitted. "It would ruin the women’s tour and affect all women’s self-esteem."

On September 20 an estimated 90 million people around the world tuned in to watch the highly publicized event.

Prior to the match Riggs presented King with a gigantic ‘Sugar Daddy’ lollipop, and in return King gave him a live, squealing piglet.

When the match began it was clear that King’s tactical homework had paid off. She comfortably beat Riggs 3-0 in straight sets, in a victory which marked an important milestone for women’s professional sport.

King later said "Our dream was for any girl in any place in the world, if she were good enough, to have a place to compete and make a living. We knew it wasn’t about our generation, but it was about the future generation."

To this day rumours abound that Riggs bet heavily against himself, then threw the match, in order to pay off a large gambling debt to the Mob.

However, friends claim he was far too proud to have deliberately lost a match in front of the biggest audience of his career, and that he was despondent for days following the defeat.

Despite their rivalry on the court and in the press, King and Riggs developed a friendship over the following years and were in regular contact until his death in October 1995.

The iconic match remains one of the most famous moments in U.S sporting history, and is the subject of a current movie starring Emma Stone as King and Steve Carrell and Riggs.

In 1982 King donated the racquet to a charity auction benefitting the Women’s Sports Foundation, and it has remained in the current owner’s private collection since 1996.

It will now be offered as one of the star lots in Bonhams’ Voices of the 20th Century auction, which takes place in New York on December 6.