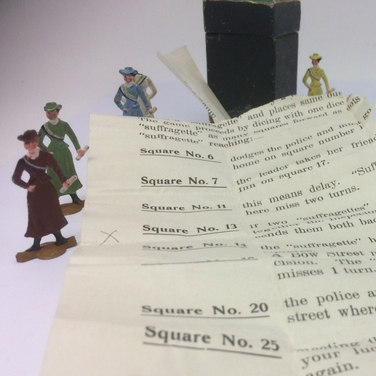 An original example of the rare suffragette board game Pank-a-Squith is coming to auction at Hansons Auctioneers.
The incomplete version, which is missing its board, is valued at £100 ($138) ahead of the March 27 sale. Complete versions have sold for up to £4,000 ($5,525), such is the game’s rarity and historical importance.

Pank-a-Squith takes its name from Pankhurst and then prime minister Herbert Asquith, who steadfastly refused to consider the possibility of British women gaining the vote. The status quo had brought Asquith to power. He was not about to change that status quo.

The game sees players manoeuvre their suffragette figure from her house to “universal suffrage”. But there are several mishaps to avoid on route.

These include Scotland Yard’s Inspector Jarvis, the magistrates court at Bow Street, Holloway Prison and forced feeding – a common occurrence for hunger-striking suffragettes in gaol.

The board, when present, features depictions of broken windows in the Home Office and suffragettes chained to railings – two examples of the WSPU’s policy of civil disturbance.

"It’s a wonderful find. It dates back to around 1909 and is probably German,” said Hansons’ John Keightley, who discovered the game at a recent valuation event.

"It is essentially a glorified version of snakes and ladders where suffragette figures have to negotiate the board while avoiding arrest.

“Objects like this show how advanced the suffragette movement was in terms of making merchandise to back their cause.”

Collectors should be aware that modern reproductions of the game also exist.

This year Britain marks the centenary of women over the age of 30 gaining the vote. Suffrage came to every woman in the UK in 1928.

Values are already strong for British suffrage memorabilia and the high profile commemorations could well push prices higher. Original WSPU scarves featuring the slogan “Votes for Women” auction for around £750 ($1,000).