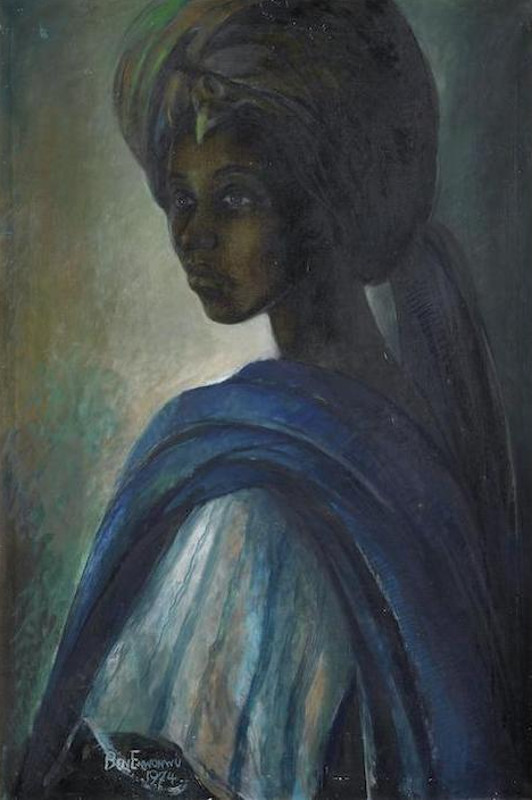 Ben Enwonwu’s Tutu, often referred to as Africa’s Mona Lisa, has sold for a massive £1.2m ($1.6m) in Bonhams’ Africa Now sale.
The work is one of three versions of this painting by the celebrated Nigerian artist and is now his most valuable work following the February 28 result.

It depicts the Ife princess Adetutu Ademiluyi, whom Enwonwu met in the Yoruba city of Ile Ife in the mid-1970s. He was immediately struck by her beauty and spent several months convincing her family to allow him to paint her portrait.

That first painting was completed in 1973. This is a later version, one of two painted in 1974. All of these paintings have been lost for many years, although the images have been regularly reproduced.

It’s a real icon in Nigeria that came to represent the spirit of reconciliation following the nation’s bitter civil war (1967-1970).

Enwonwu and Ademiluyi were Igbo and Yoruba respectively. The war had been triggered when the Igbo people tried to break away from Yoruba-controlled Nigeria to form a new state known as Biafra.

The work reaffirmed a Nigerian cultural identity, going some way towards healing ethnic divides. Prints take pride of place in homes across Nigeria to this day.

However, all three versions went missing sometime after Enwonwu’s death in 1994. This example is the only one to have resurfaced. It was found in a home in north London during a valuation earlier this year.

The acclaimed Nigerian novelist Ben Okri, author of The Famished Road (1991), said: "It amounts to the most significant discovery in contemporary African art in over fifty years.

“It is the only authentic Tutu, the equivalent of some rare archaeological find. It is a cause for celebration, a potentially transforming moment in the world of art."

The other works remain lost. But you can bet the race to find them just heated up.